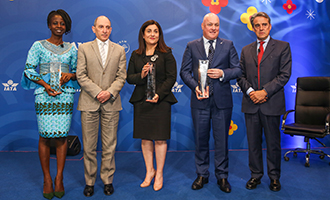 ​Aviation is the Business of Freedom. The essence of aviation is building a global community by connecting people, businesses and cultures across great distances. Ten million people work in the aviation industry to make this happen. It is important that this workforce reflects the amazing diversity and inclusion that it fosters in our society. The IATA Diversity & Inclusion Awards, sponsored by Qatar Airways, aim to recognize and celebrate the great work that is being done to take the industry into the future.

Congratulations to the winners of the inaugural IATA Diversity & Inclusion Awards which recognize three categories of leadership in diversity and inclusion:

Each award category comes with US$25,000 in prize money, generously funded by Qatar Airways.