(Santiago, Chile) - Chile became the first state to formally announce that it is making the IATA Operational Safety Audit (IOSA) a condition of its airline certification process. General Enrique Rosende, Director General of Civil Aviation for Chile, made the announcement on 28 March 2006 at the Wings of Change Conference being hosted by the International Air Transport Association (IATA) in Santiago, Chile.

"Safety is our industry's number one priority. Transparency, harmonisation and cooperation among governments and industry have made air transport the safest form of travel. Chile has always been a regional leader in aviation safety. Today's announcement puts Chile at the forefront of using IOSA - the industry's first global benchmark for safety - to complement its safety oversight program," said Giovanni Bisignani, IATA's Director General and CEO.

General Rosende said, "IOSA is an important driver for aviation safety. Within this year Chile will change its regulations to make IOSA a requirement for AOC applications."

Since its inception in 2003, IOSA has quickly become an integral part of the industry's global safety effort. Currently 150 airlines representing 70% of scheduled international air traffic are in the process. Of these, 98 have completed the process and are listed on the IOSA registry. As a condition of membership, all IATA carriers must be IOSA audited by the end of 2007.

IOSA standards are freely available to any commercial airline. They were developed in cooperation with the International Civil Aviation Organization (ICAO) and some of the industry's leading regulators including the US FAA, CASA and Transport Canada among others. IOSA audits are conducted by 7 commercial audit organisations accredited by IATA.

Currently IATA is working with governments around the world to incorporate IOSA into their certification process, including Madagascar, Jordan, Bahrain, Egypt, Turkey, Mexico and Ethiopia.

At the global level, IOSA is being recognised for its ability to complement government efforts on safety. On 20 March 2006, IATA and ICAO signed an agreement to share safety-related information from their respective audit programs—IOSA and Universal Safety Oversight Audit Program (USOAP). The goal of the agreement is to enhance aviation safety by better identifying safety risks and preventing aircraft accidents.

"Safety is absolutely critical. The industry accident rate in 2005 - 0.76 per million flights - was the best ever. The record for IATA members was even better at 0.35. Importantly, the industry is committed to making the safest mode of transport even safer. To that end, aviation safety has taken giant steps in the right direction this month. First, our agreement with ICAO under the leadership of Dr. Kotaite will ensure transparency and information sharing at the global level. Second, the decision of the Government of Chile is a model for how industry can work with governments at the national level by using IOSA as a requirement for airline operators. We encourage other governments to take similar advantage of IOSA," said Bisignani. 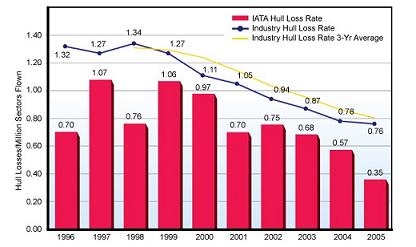