Total passengers set to double to 7 billion by 2034

“The demand for air transport continues to grow. There is much work to be done to prepare for the 7 billion passengers expected to take the skies in 2034,” said Tony Tyler, IATA’s Director General and CEO.

“Economic and political events over the last year have impacted some of the fundamentals for growth. As a result, we expect some 400 million fewer people to be traveling in 2034 than we did at this time last year. Air transport is a critical part of the global economy. And policy-makers should take note of its sensitivity. The economic impact of 400 million fewer travelers is significant. Each is a lost opportunity to explore, create social and cultural value, and generate economic and employment opportunities. It is important that we don’t create additional headwinds with excessive taxation, onerous regulation or infrastructure deficiencies,” said Tyler.

Divergence among the BRIC Nations

A sizable gulf has opened up between the performance of air passenger markets in the BRIC economies (Brazil, Russia, India and China). China and India are growing fast, with annual growth this year-to-date of 12.5% and 16.5% respectively. India has bounced back from a subdued 2014, and is seeing a strong increase in domestic frequencies. Although China’s growth rate has moderated, it is still on course to add an additional 230 million passenger journeys between 2014 and 2019. This is more than double the other three BRIC nations put together. Brazil and Russia, by contrast, are struggling. Falling oil and other commodity prices are partly to blame. Economic sanctions have also affected the Russian economy. It is notable that airlines in Brazil pay some of the highest fuel charges in the world; bringing the country’s fuel policy in line with global standards would certainly be a boost for air transport.

Exciting prospects for Iran and Cuba

The prospects for more open travel between the rest of the world and Cuba and Iran offer exciting possibilities for business, tourism and development as diplomatic relations warm up. Of the two markets, Iran offers the greater potential. Although Cuba is the largest Caribbean country by population, passenger growth would be from a low base of 5 million passengers today to around 13 million by 2034, in the best-case scenario. Iran, by contrast, already has a market of 12 million passengers, mostly domestic flyers. If strong GDP growth is accompanied with a full normalization of international relations and the end to sanctions, the total size of the Iran market could be 43.6 million passengers by 2034.
“There is a great deal of scope for economic development in Cuba and Iran, and air transport can play an enormous role in that. Relative to their economic development, the people of Iran and Cuba fly less than the global average. In Iran, full integration in the global economy could mean a difference in passenger growth of around 13 million extra travelers a year,” said Tyler.

China is expected to overtake the United States as the world’s largest passenger market (defined by traffic to, from and within) by 2029. In 2034 China will account for some 1.19 billion passengers, 758 million more than 2014 with an average annual growth rate of 5.2%. Traffic to, from and within the US is expected to grow at an average annual growth rate of 3.1% that will see 1.16 billion passengers by 2034 (523 million more than 2014). India will displace the United Kingdom as the third-largest market in 2026, with Indonesia rising to number 5 in the world. Japan, Spain, Germany and France fall relative to their competitors, Italy falls out of the top 10, while Brazil moves from 10th place to 7th. 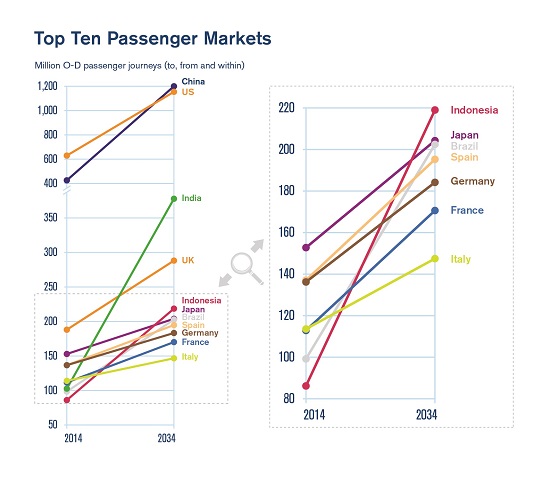 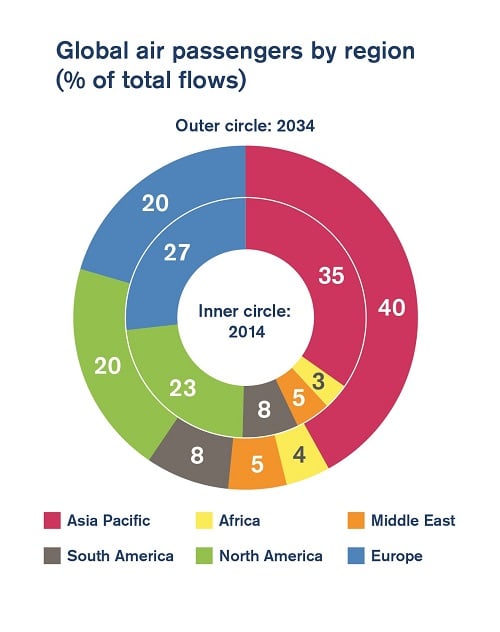 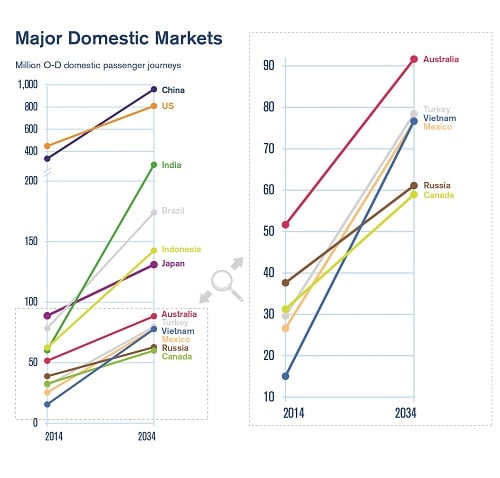 At present, aviation helps sustain 58 million jobs and $2.4 trillion in economic activity. In 20 years’ time, aviation is expected to support around 105 million jobs and $6 trillion in GDP. The aviation industry, however, also recognizes that air travel has an environmental impact. It is committed to reducing its carbon footprint. In 2009, the industry agreed three targets which will ensure that aviation plays its part in ensuring a sustainable future.

“Aviation is determined to achieve carbon neutral growth from 2020. But we need governments to help by agreeing a global market-based measure, to be implemented from 2020. We believe that a global carbon offsetting scheme would be the best option, but the decision rests with the 191 member states represented at the International Civil Aviation Organization, who will meet in late 2016. We urge all governments to agree a global solution and help air transport meet its goals for a sustainable future,” said Tyler.