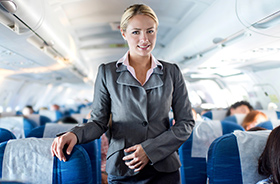 “2015 was another year of contrasts when it comes to aviation’s safety performance. In terms of the number of fatal accidents, it was an extraordinarily safe year. And the long-term trend data show us that flying is getting even safer. Yet we were all shocked and horrified by two deliberate acts--the destruction of Germanwings 9525 and Metrojet 9268. While there are no easy solutions to the mental health and security issues that were exposed in these tragedies, aviation continues to work to minimize the risk that such events will happen again,” said Tony Tyler, IATA’s Director General and CEO. 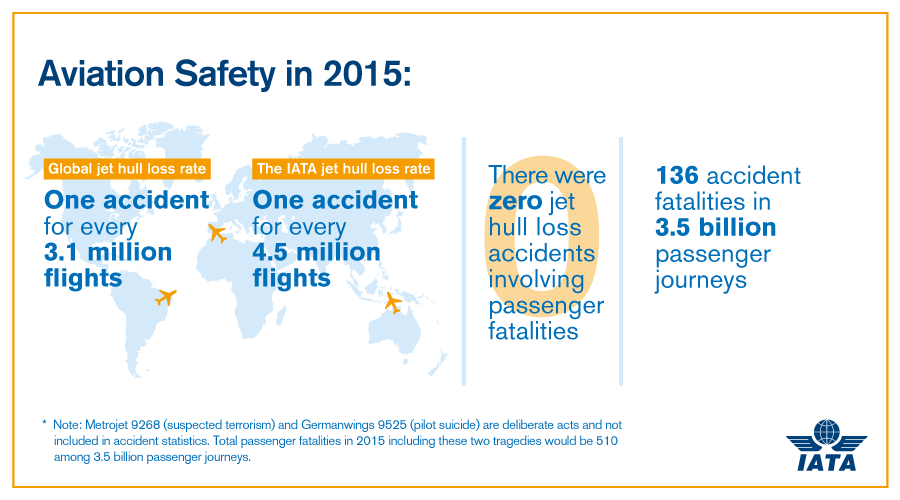 1. Eight fatalities on the ground resulted from a runway excursion in the DR Congo involving a freighter aircraft.
2. A passenger jet and a smaller jet conducting an air ambulance flight collided over Senegal. Damage to the passenger jet was moderate and there were no injuries to any on board. The wreckage of the air ambulance has not been located and is presumed lost with the deaths of all 7 persons on board.

All regions but one (North America) saw their safety performance improve in 2015 compared to the respective five-year rate 2010-2014, as follows:

The following regions saw their turboprop safety performance improve in 2015 when compared to the respective five-year rate:

North Asia had the worst performance (25.19 compared to 5.90), reflecting two regional hull losses, one of which was fatal. Owing to the relatively few turboprop operations in North Asia—approximately 80,000 flights in 2015 out of a world total of 6.2 million--the statistical relevance of a small number of accidents is magnified.

Airlines on the IATA Operational Safety Audit (IOSA) Registry experienced 4 jet hull loss accidents (none fatal) and one fatal turboprop hull loss accident. The total accident rate (all aircraft types) for IOSA-registered carriers was nearly three times as good as the rate for non-IOSA carriers (1.14. vs. 3.23) last year; and over the five years 2010-2014, the rate is more than three times better (1.48 vs. 4.99). As of 12 February, 408 airlines were on the IOSA registry. For IATA’s 262 member airlines, IOSA registration is a requirement. That some 146 non-member airlines are also on the registry is evidence that IOSA is the global benchmark for airline operational safety management.

“Now in its 13th year, IOSA continues to be recognized as the gold standard for airline operational audits. In 2016 we will continue to tweak IOSA to ensure we are maintaining the highest standards of quality assurance in the audit process,” said Tyler.

Sub-Saharan airlines had four commercial hull loss accidents in 2015, two involving jets and two involving turboprops. One of the turboprop accidents resulted in passenger fatalities.
“African safety is moving in the right direction. In 2015 we saw improvements compared to the five-year accident rate for both jet and turboprop hull losses. Nevertheless, challenges to bringing Africa in line with global performance remain. One valuable tool to assist this effort is IOSA. The 32 Sub-Saharan airlines on the IOSA registry are performing 3.5 times better than non-IOSA operators in terms of all accidents (3.62 per million flights versus 12.99). States should make IOSA a part of the certification process.
“Governments in the region also need to accelerate implementation of ICAO’s safety-related standards and recommended practices (SARPS), according to the Universal Safety Oversight Audit Program (USOAP). As of the end of January 2016, only 21 African States had accomplished at least 60% of implementation of the SARPS,” said Tyler.