Singapore - The International Air Transport Association (IATA) welcomed partnerships among all stakeholders, including governments, to help aviation fulfil its important role as a catalyst for global economic growth and development.

“Airlines will transport 3.8 billion passengers and 53 million tonnes of air cargo this year. In doing so, they will support some $2.4 trillion in economic activity and some 58 million jobs. In Asia-Pacific, the corresponding numbers are over $700 billion in GDP and 33 million jobs. By 2034, global demand will reach 7 billion passengers, but that demand can only be accommodated through a working together approach by all aviation stakeholders including governments,” said Tony Tyler, IATA’s Director General and CEO. 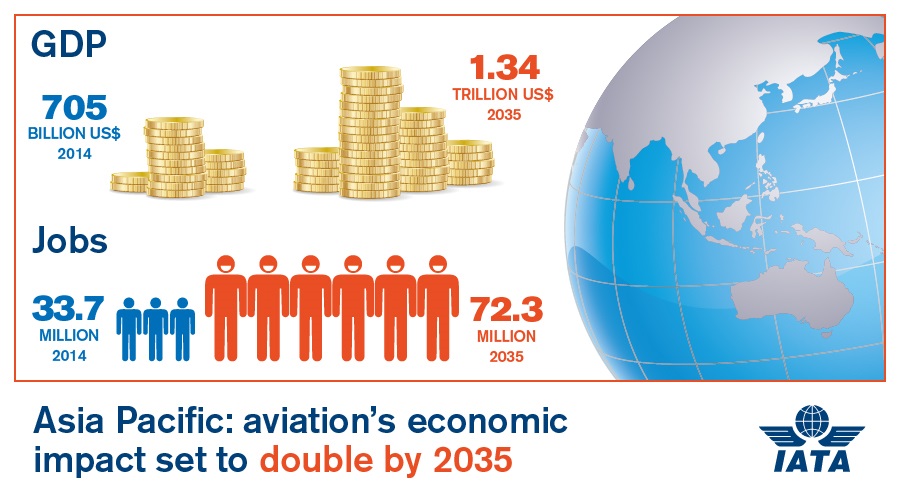 Tyler made his remarks at the Singapore Airshow Aviation Leadership Summit hosted by the Singapore Government, Experia Events and IATA. He cited the collaborative event as an example of the working together approach. "It’s great that we are looking at the challenges of future growth together with all stakeholders."
Tyler identified three examples where partnerships are vital to meeting forecast demand for connectivity.

Safety: “Safety is our highest priority and we are seeing steady progress through our partnership approach involving airlines, airports, air navigation services providers, manufacturers, governments and other stakeholders. If we look at jet aircraft, in 2015 we had one major accident for every 3.1 million flights. That’s a significant improvement on the five-year average (2010-2014) of one accident for every 2.2 million flights. Yet the last two years have also seen events that can only be classified as ‘unthinkable’, including the disappearance of an aircraft, the downing of an aircraft by a missile, and the deliberate destruction of an aircraft by a suicidal pilot. We must add to that the loss of an aircraft in what is suspected of being an act of terrorism.

“There are no simple solutions to the issues raised by these terrible tragedies. But we must honor those who lost their lives, and their friends and loved ones, by re-dedicating ourselves to making flying even safer. Working with our partners in government and industry will drive improvements based on global standards and best practices.”
Sustainability: “Environmental sustainability is our license to grow,” said Tyler. The aviation industry has adopted a four-pillar strategy based on technology, operations, infrastructure, and market-based measures to address its CO2 emissions, and has adopted ambitious carbon reduction targets:
“We are seeing success through our partnership approach. Fuel efficiency is improving around 2% a year. Sustainable fuels for aviation have matured with the knowledge that they are safe and effective. And earlier this month a CO2 standard was agreed that will institutionalize the continuous technical improvements that come with every new generation of aircraft and engines. Now we need governments to step up at the International Civil Aviation Organization (ICAO) Assembly this autumn to agree a mandatory global carbon offset scheme to be in place in time for 2020. Our membership is doing all it can to provide support to this bold initiative.”
Infrastructure Development: “We will add 3.2 billion new air travelers in less than two decades. Of these, 1.8 billion—56%--will be in Asia-Pacific—the vast majority on routes linked to China. If we can realize that growth potential, then jobs and economic activity will follow. By 2034 aviation in the region could be supporting over 70 million jobs and some $1.3 trillion in economic activity. But that’s dependent on the industry having sufficient infrastructure,” Tyler said.
Tyler said that many governments in the Asia-Pacific region value highly the economic contribution of connectivity enabled by aviation and work to sustain it.
However, Tyler cautioned that “it will be a challenge to keep up infrastructure development in line with growing demand—and to ensure that that skies can still operate efficiently as the industry grows. The Gulf hubs already face a similar challenge where much more coordination in airspace management is needed. Europe probably faces the greatest risk. Air traffic management is an expensive and disjointed mess as a result of governments’ protection of narrow domestic interests at the expense of Continental success. Moreover, a Eurocontrol study estimates that European airports could also face a capacity crunch—with a 12% shortfall against demand by 2035.”
Read Tony Tyler’s remarks
View Tony Tyler's interview
For more information, please contact:
Corporate Communications
Tel: +41 22 770 2967
Email: corpcomms@iata.org