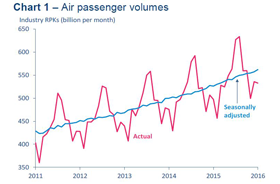 ​Geneva - The International Air Transport Association (IATA) announced global passenger traffic results for January 2016 showing demand (revenue passenger kilometers or RPKs) rose 7.1% compared to January 2015. This was ahead of the 2015 full year growth rate of 6.5%. January capacity rose 5.6%, with the result that load factor rose 1.1 percentage points to 78.8%, the highest load factor ever recorded for the first month of the year.

“January maintained the strong traffic growth trend seen in 2015, showing the resilience of demand for connectivity despite recent turmoil in equity markets. The record load factor is a result of strong demand for our product and airlines making the most productive use of their assets. Underlying conditions point to another strong year for passenger traffic, with the latest decline in oil prices likely providing additional stimulus for air travel growth,” said Tony Tyler, IATA’s Director General and CEO.