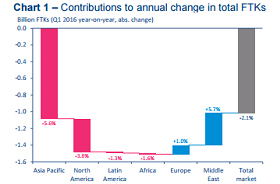 The weak results reflect subdued growth in world trade, exaggerated by the comparison to a particularly strong start to 2015 when air freight volumes were boosted by the effects of the US West Coast seaports strike. The most significant fall in demand was reported by carriers in Asia-Pacific and North America. Combined they account for around 60% of global freight traffic and reported declines of 5.2%, and 1.8%, respectively.

“It is shaping up to be another tough year for air cargo. February 2016 world trade volumes were only 0.4% higher than at the end of 2014. And the expectations of purchasing managers gives little optimism for an early uptick. The combination of fierce competition, capacity increases and stagnant demand makes this a very difficult environment in which to generate profits,” said Tony Tyler, IATA’s Director General and CEO.

African airlines witnessed a 3.1% drop in demand in March 2016 compared to the same period last year. A more modest decline of 1.6% was seen in year-on-year Q1 performance. Notably, on the back of long-haul expansion, the AFTKs for African airlines surged by 22.6% year-on-year over the first quarter of 2016. This is more than double the pace of any other region in recent months.

Asia-Pacific carriers saw a 5.2% drop in demand in March 2016 compared to the same month last year. The decline is exaggerated by the effects of last year’s US seaport disruption which fueled strong demand for the region’s carriers. Nonetheless, demand is weak with export volumes from emerging Asian economies having contracted in annual terms for 11 of the past 12 months.

European airlines saw demand for air cargo grow by a modest 1.3% in March 2016, compared to the same period in 2015, while capacity increased by 7.9%. Weak cargo demand is a continuing story for European carriers for whom cargo volumes stand at just 1% above early 2008 levels.

Latin American carriers saw demand decrease by 5.9% in March 2016 versus March 2015. Volumes are now almost 15% lower that their seasonally-adjusted peak in late-2014. The hardest hit routes are those within South America, reflecting the region’s challenging economic environment, particularly in Brazil.

Middle Eastern carriers reported a 2.4% increase in demand over March last year—the slowest since July 2009. This reflects both a slowdown in network expansion by the region’s main carriers over the past six months and weak trading conditions.

North American airlines saw demand fall by 1.8% in March 2016 versus March 2015, partially due to the rollover effect of the US port strike in 2015 which gave air freight in the region a boost. Additionally, the region’s carriers are negatively impacted by the drop in global trade while the strong US dollar is keeping exports under pressure.​​​​​