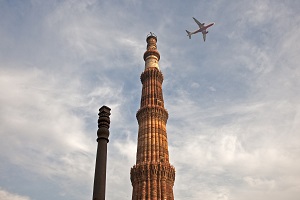 ​Delhi - The International Air Transport Association (IATA) called for a renewed look at the results of Indian public-private partnership in airport privatization, a reduction in taxation and for India to join international efforts on sustainability for air transport. These will be key enablers of a vitally important industry to India to be an even bigger catalyst for social and economic development.

“Air transport contributes enormous value to India, stimulating growth and development with increasingly accessible air connectivity. India’s air transport industry has been through tough times. While many Indian airlines are now posting profits, the sector is still in loss territory with many challenges. These include a massive debt burden, onerous regulations, expensive airport infrastructure and high taxes. Addressing these will bring huge social and economic benefits to India,” said Alexandre de Juniac, IATA’s Director General and CEO, who is in India for a visit.

India’s air transport sector already supports 8 million jobs and contributes $72 billion in GDP. In IATA’s recently released 20-year air passenger forecast, India will displace the UK to be the third largest aviation market with 278 million passengers in 2026. In 2035, the horizon of IATA’s just-published 20-Year Passenger Forecast, IATA expects the Indian market to serve 442 million passengers. “Realizing that growth means that we will need to accommodate the potential of 322 million new passengers in just two decades. That will be a real challenge. Without significant change, the economic and social development potential gains that come with a healthy and growing air transport sector are put at risk,” said de Juniac.

Policy Framework: De Juniac congratulated India on publishing its first-ever Civil Aviation Policy which contains some encouraging elements, such as developments on open-skies, code-sharing and foreign direct investment (FDI). In fact, allowing FDI of 100% in an Indian airline places India among the most progressive states in this respect. But, de Juniac also noted concerns including the mandating of hybrid till for the regulation of airport charges, and the plans for a levy to cross subsidize regional flights.

“I look forward to engaging in a comprehensive dialogue with the government on what needs to change once the policy has had time to ‘mature’,” said de Juniac.

Airport Privatization: The awarding of airport concessions has contributed to the development of India’s airport infrastructure. While the passenger experience has improved, the impact for airlines has been far less positive.

“IATA does not support the privatization of airports. Nor are we officially opposed to it. But looking at the experience of airport privatization – in India and elsewhere – I am hard pressed to find an example where the results, overall, have been positive. A private sector mindset can add value to airport projects with efficiency, cost effectiveness, entrepreneurial spirit, and so on. But we need a stronger regulatory framework than exists today to ensure that there is a balance struck between commercial and national interests,” said de Juniac.

Airlines operating in India have faced huge costs increases. This is in part due to the up to 46% concession fee that the private airport operators have to pay to the government. At the same time, the Airport Economic Regulatory Authority (AERA) has been unable to preserve its independence sufficiently and has not been able to implement its own tariff orders, such as the one to reduce Delhi’s charges by 96%.

“There is no turning back the public-private partnership in Indian airports. But what can be done is to strengthen the regulatory structure for the airports already privatized in order to defend the public interest,” said de Juniac.

IATA has been working closely with the Goods and Services Tax (GST) Secretariat in India to address some of the issues that are of concern to airlines. “The GST regime needs to adhere to international standards and principles. We have called for a zero-rating for international flights when the GST comes into effect next April. This seems unlikely. To limit its damage to the sector’s competitiveness, we would at least hope for an abatement in the rate,” said de Juniac.

Sustainability: For India to achieve its aviation potential, the industry needs to be able to grow in a sustainable manner. Earlier this month, governments reached a global agreement to establish a Carbon Offset and Reduction Scheme for International Aviation (CORSIA). This was a history making achievement that has some 65 states committed to participate in the voluntary period.

“It was a huge disappointment not to have India among the initial 65 states. As India had ratified the Paris Agreement in the same week, we were hopeful that the spirit of climate leadership would extend to aviation emissions. We continue to urge the Indian government to come on board with CORSIA and join the voluntary period,” said de Juniac.

CORSIA is a mechanism to facilitate growth sustainably. It applies to international operation and the costs of CORSIA will be manageable even for a low-margin industry.