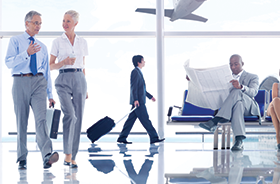 October’s performance was a slow-down on the 7.1% year-on-year growth rate recorded in September but still was broadly in line with 10-year averages. Domestic and international travel growth largely was in balance.

“Passenger demand growth in October was consistent with long-term trends but represented a deterioration compared to September. While the negative traffic impact from terror attacks and political instability in parts of the world has receded, the long downward trend in yield—which helped to stimulate travel--has leveled off. Furthermore, the recent OPEC agreement to restrict oil production suggests fuel prices have ended their slide,” said Alexandre de Juniac, IATA’s Director General and CEO.

Domestic demand climbed 5.6% in October compared to October 2015, which was matched by a similar increase in capacity. There was continued wide variation in individual country results, with India and China enjoying double-digit growth rates while other markets experienced much slower growth and Brazil remained in decline.