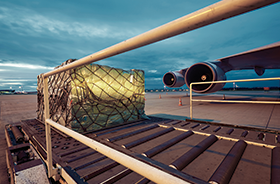 “Global air freight markets look set to end 2016 on a high note. Demand is growing at its fastest pace in 18 months. It remains to be seen how long this growth trend will endure after the year-end peak period and we still face headwinds from weak global trade. But there are some encouraging signs. The peak has been stronger than expected. And purchasing managers are reporting a pick-up in new export orders. So we will enter 2017 propelled by some much-needed positive momentum,” said Alexandre de Juniac, IATA’s Director General and CEO.


Some one-off factors are likely impacting October’s positive results: (1) there is potential modal shift to air cargo following the collapse of the Hanjin Shipping Company in August and (2) there could be some last minute reliance on air transport as companies exercised caution in ordering as a result of weak market conditions earlier in the year.


Structural market shifts are also likely underpinning a portion of the stronger performance. This includes strong growth in cross-border e-commerce and pharmaceutical flows. Preparation for the increasing popularity of sales events such as Black Friday and Cyber Monday may also have contributed to the increased demand peak.


“The drivers of stronger growth are sending a major signal for change to the air cargo industry. Whether it is e-commerce or the trade in pharmaceuticals, shippers are demanding more than current paper processes can support. The shift to e-freight is more critical than ever,” said de Juniac.

Airlines in all regions except Latin America reported an increase in year-on-year demand in October. However results continued to vary considerably.


Asia-Pacific airlines saw demand in freight volumes both from the ‘Within Asia’ air cargo market as well as on routes to and from the region increase in October 2016 compared to the same period last year. Regional demand increased 7.8% and capacity grew by 3.9%. International freight volumes expanded 8.0% in October, contributing to an annualized increase, in seasonally adjusted terms, of 15% since March 2016.


North American carriers’ freight volumes expanded 3.7% in October 2016 compared to the same period last year, and capacity increased by just 0.1%. International freight volumes increased by 7.2% in October – their fastest pace since the disruption at US seaports in February last year. Seasonally-adjusted freight volumes are back to the levels reached since the post-global financial crisis bounce-back in 2010. US exports continue to suffer from the strength of the US dollar which has kept the US export market under pressure.


European airlines posted the largest increase in freight demand of all regions in October, 13.4% year on year. Capacity increased 5.9%. October’s positive performance corresponds with the sustained increase in export orders in Germany over the last few months and the ongoing weakness in the Euro. International freight demand grew by 13.2% year-on-year in October – the fastest pace since April 2011 – and the upward trend in seasonally-adjusted traffic was very strong.


Middle Eastern carriers saw air freight demand increase by 9.2% in October 2016 year-on-year, marking an improvement over the last few months’ performance. However seasonally-adjusted growth has slowed, predominantly due to weak freight volumes between the Middle East and Asia, and the Middle East and North America. Capacity in the region increased by 4.2%.


Latin American airlines experienced a demand contraction of 0.1% in October 2016, compared to the same period last year, while capacity decreased by 1.8%. International freight volumes grew by 0.2%. In seasonally-adjusted terms this is an improvement over the last few months. The region continues to be blighted by weak economic and political conditions, particularly in the region’s largest economy, Brazil.


African carriers’ freight demand increased by 7.4% in October 2016 compared to the same month last year. However, capacity surged by 24.7% on the back of long-haul expansion, in particular by Ethiopian Airlines. International freight demand for African airlines slowed in October, but still remained robust at 7.7% year-on-year.