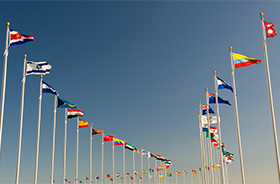 The International Air Transport Association (IATA) welcomed the entry into force of the Trade Facilitation Agreement (TFA) today. This follows the ratification of the treaty by two-thirds of the members of the World Trade Organization (WTO).

“The Trade Facilitation Agreement will cut red tape at the border for faster, cheaper and easier trade. That’s great news for airlines, which deliver about a third of the goods traded across borders by value. And it’s a particularly timely reminder of the dangers of the current protectionist rhetoric that we are seeing in various parts of the world. Trade leads to growth; and growth results in prosperity. With the treaty now in force, we urge governments to move forward with early implementation so that the TFA’s substantial benefits can be realized,” said Alexandre de Juniac, IATA’s Director General and CEO.

The TFA was concluded at the Bali Ministerial Conference in December 2013. The agreement promotes trade by establishing harmonized rules for further expediting the movement, release and clearance of goods crossing borders, including goods in transit. Particularly important for the air transport industry is the commitment to accepting e-payments and electronic documentation. This aligns with the industry’s goal to modernize air cargo with its e-freight program.

“Aviation is the business of freedom. Air cargo is a vital link in the manufacturing supply chain and between producers and consumers. We look forward to working with governments and airlines to maximize the benefits of the TFA and make air cargo an even more potent catalyst for jobs, growth, and prosperity,” said de Juniac.