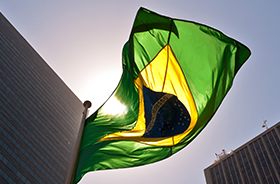 These findings are among the highlights of ‘The Importance of Air Transport in Brazil’ (pdf) study conducted by Oxford Economics on behalf of IATA.

“We are proud of aviation’s positive contribution to Brazil and the wealth it generates for the country. Air transport facilitates exports, foreign direct investment and tourism. However, by adopting policies that ensure a more stable and competitive operating environment for the airlines, Brazil could reap much larger dividends from aviation,” said Peter Cerda, IATA’s Regional Vice President for the Americas, who is in Brazil for the release of the study.

Infrastructure, Ease of Travel and Cost Competitiveness Are Vital:

“With aircraft taking off or landing some two million times a year in Brazil, the air transport industry’s value speaks for itself. But removing the artificial barriers that are holding back the industry in Brazil is paramount. Air transport contributes 3% of GDP in Chile, 3% in Ecuador and 2.1% in Colombia; at just 1.4% of GDP in Brazil there is considerable room for improvement,” said Cerda.