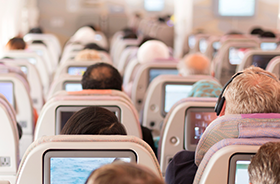 Total revenue passenger kilometers (RPKs) rose 4.8%, compared to the same month last year. Although this was below growth achieved in January, year-to-year comparisons are distorted because February 2016 was a leap month. Adjusting for the one fewer day this year, the underlying growth rate was estimated at 8.6%, just under January’s increase of 8.9%. Monthly capacity (available seat kilometers or ASKs) increased by 2.7%, and load factor rose 1.6 percentage points to 79.5%, which was the highest ever recorded for February.

“The strong demand momentum from January has continued, supported by lower fares and a healthier economic backdrop. Although we remain concerned over the impact of any travel restrictions or closing of borders, we have not seen the attempted US ban on travel from six countries translate into an identifiable traffic trend. Overall travel demand continues to grow at a robust rate,” said Alexandre de Juniac, IATA’s Director General and CEO.

IATA estimates that allowing for inflation, the price of air travel has fallen by more than 10% in real terms over the past year, accounting for more than half the growth in RPKs in early 2017.

February international passenger demand rose 5.8% compared to February 2016, which was down compared to the 9.1% yearly increase recorded in January. Adjusting for the leap year, however, growth actually accelerated slightly compared to January. Total capacity climbed 3.4%, and load factor rose 1.8 percentage points to 78.4%.

Domestic travel demand rose 3.3% in February compared to February 2016, reduced from 8.7% in January, but again, the leap year effect greatly exaggerated the slowdown. Results varied widely as Australia, Brazil and the US all registered non-adjusted declines. Domestic capacity climbed 1.6%, and load factor increased 1.3 percentage points to 81.4%.

The year has opened with some shocks—the attempted ban on travel to the US by citizens of six countries and the restrictions on the carry-on of large electronic items from certain airports in the Middle East and North Africa on direct flights to the US and the UK. The potential implications of the Brexit talks on the air transport industry are significant and the political rhetoric of protectionism and closing of borders is adding to the ambiguity.

“It’s intolerable that governments continue to add to the uncertainties facing the air transport industry by failing to engage airline operational know-how on issues that can damage public confidence. The introduction of restrictions on the carry-on of large electronic devices was a missed opportunity and the result was a measure that cannot stand-up to the scrutiny of public confidence in the long term. Although Australia’s measures were also implemented without consulting the industry, they at least demonstrate the potential to mitigate the threat with less disruptive means. We all want to keep flying secure. And we can do that most effectively by working together,” said de Juniac.

In tandem, states need to support the International Civil Aviation Organization (ICAO) as it develops a Global Aviation Security Plan. Additionally, next month, ICAO member states will consider amendments to Annex 17 of the Chicago Convention that would require information sharing. “The security experience of recent years should compel states to support this,” said de Juniac.