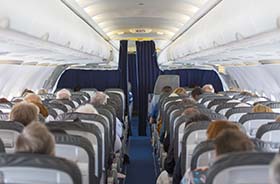 Geneva - The International Air Transport Association (IATA) announced global passenger traffic results for May showing that demand (measured in revenue passenger kilometers, or RPKs) rose 7.7% compared to the same month in 2016. This was slower than the 10.9% growth recorded in April. However, this still was well ahead of the 5- and 10-year average growth rates. Capacity climbed 6.1%, and load factor rose 1.2 percentage points to 80.1%, which was a record high for the month.

After adjusting for inflation, airfares at the start of the second quarter were around 6% lower than a year ago. IATA estimates that this contributed to around two-fifths of the annual growth in passenger traffic seen in May. However, the degree of fare stimulus is around half that seen in the second half of 2016. This stimulus is likely to fade further in light of rising airline cost pressures, while business confidence has softened. However, passenger demand is likely to remain well supported during the upcoming peak travel months of July and August.

“Passenger demand is solid. And we don’t foresee any weakening over the busy summer months in the Northern Hemisphere. But the rising price of fuel and other input costs is likely to see airlines’ ability to stimulate markets with lower fares taper over the coming months. In parallel, rising trade protectionism and barriers to travel are worrying trends that, if unchecked, could impact demand. As a business airlines depend on borders that are open to trade and people,” said Alexandre de Juniac, IATA’s Director General and CEO.

Domestic demand rose 7.9% in May compared to May 2016, down slightly from the 8.1% year-on-year growth recorded in April. Results varied widely, with China, India, Japan and Russia showing double-digit percentage growth while other regions were in the low single-digit range.

On 28 June 2017, the U.S. Department of Homeland Security (DHS) announced new enhanced security measures as an alternative to global restrictions on the carriage of large PEDs in the cabin on flights to the U.S. The new measures will be introduced over the next months across 280 locations worldwide.

“Enhanced security measures are preferable to the expansion of the current ban on the carriage of large electronic devices in the cabin. We have seen the negative impact that this has on demand. But the timeline to implement the enchanced security measures announced by the US DHS is extremely challenging. And there are many unresolved issues that need greater cooperation among states to minimize the impact on air travelers and global connectivity,” said de Juniac.