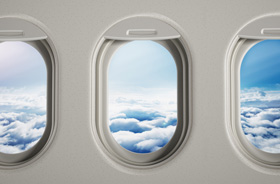 ​Geneva - The International Air Transport Association (IATA) announced global passenger traffic data for June showing that demand (measured in total revenue passenger kilometers or RPKs) rose by 7.8% compared to the year-ago period. This was in line with the 7.7% growth recorded in May. All regions reported growth. June capacity (available seat kilometers or ASKs) increased by 6.5%, and load factor rose 1.0 percentage point to 81.9%.

“A brighter economic picture and lower airfares are keeping demand for travel strong. But as costs rise, this stimulus of lower fares is likely to fade. And uncertainties such as Brexit need to be watched carefully. Nonetheless, we still expect 2017 to see above-trend growth,” said Alexandre de Juniac, IATA’s Director General and CEO.

Demand for domestic travel climbed 8.2% in June compared to June 2016, up slightly from the 7.9% growth seen in May. June capacity increased 7.0%, and load factor rose 0.9 percentage points to 84.3%. Led by China and India, all markets reported demand increases, but with wide variation.

India led all markets with a 20.3% rise in domestic traffic in June. However, the very strong upward trend in traffic has slowed since the country’s unexpected ‘demonetization’ in November 2016. India’s streak of year-on-year double-digit traffic growth may have ended with June.

The Bottom Line: Air travel recorded its fastest first-half growth in 12 years, pushing load factors to record highs. And the peak northern summer travel season is likely to be record-breaking.

“This is all good news. The demand for travel is strong and that, in turn, will make a positive contribution to the global economy. This growth will also further expose infrastructure deficiencies. In every part of the world airport and air navigation infrastructure is struggling to cope with demand. There are plenty of examples linking connectivity and economic prosperity. But few governments have been able to deliver on the imperatives of sufficient capacity, quality aligned with user needs and affordability. This year’s strong growth is a reminder that there is no time to lose,” said de Juniac.