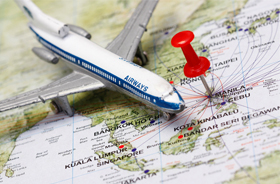 Manila – The International Air Transport Association (IATA) called on the government of the Philippines to maximize the economic and social benefits that aviation can bring to the development of the country by (1) addressing airport infrastructure deficiencies in Manila, (2) abandoning proposals for increased taxation on aviation and (3) adopting Smarter Regulation Principles.

"Aviation is vital to the Philippines. It supports 1.2 million jobs and $9.2 billion in GDP. The domestic network binds the country across 7,000 islands. International links keep families and businesses connected, and bring in tourists. But the social and economic benefits of air transport are at risk if the key issues of airport infrastructure, excessive regulation and taxation are not addressed," said Alexandre de Juniac, IATA's Director General and CEO.

Ninoy Aquino International Airport (NAIA) was built to handle 30 million passengers but is handling nearly 40 million passengers currently. "There is an urgent need for an airport master plan to accommodate the growing demand for connectivity" said de Juniac.

The top priorities are:

"There is no time to lose – every landing that cannot be accommodated is lost money and opportunity for the Philippine economy. Siting, designing, building and financing a new airport and the connecting infrastructure can easily be a ten-year project. Even the most aggressive possible incremental capacity expansion plan of NAIA will not be able to adequately cope with the growing demand," said de Juniac.

"Well-constructed regulation has played a key role in making the industry safe and reliable. But excessively onerous regulation can be a huge burden on the ability of aviation to deliver its social and economic benefits," said de Juniac.

"Powerful market forces govern a hyper competitive industry. When things go wrong, airlines have every incentive to make them right because they don't want to lose their customers. And if the customer is disappointed, they have the ultimate power in their wallets of choosing another airline for their next trip," said de Juniac.

De Juniac urged the authorities to adopt smarter regulation principles when developing the regulatory framework. These include (1) respect global standards where they exist; (2) focus on solving real problems; (3) ability to pass rigorous cost-benefit analysis and (4) transparent and does not distort competition.

De Juniac called on the Philippine government to avoid implementing a tourism tax and to abandon a proposed Green Fee.