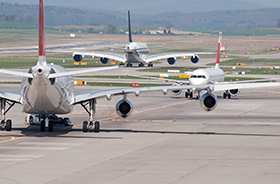 Singapore – The International Air Transport Association (IATA) is calling for urgent attention to address infrastructure challenges in order to secure the industry's future.

"Having the infrastructure to grow is vital to our industry's future. But in many key places, it is not being built fast enough to meet growing demand. And there are worrying trends which are increasing costs. One of these is airport privatizations. We have not found the correct regulatory framework to balance the interests of the investors to turn a profit, with the public interest for the airport to be a catalyst for economic growth. All the optimism supporting strong aircraft orders will mean nothing if we don't have the capability to manage traffic in the air and at airports," said Alexandre de Juniac in his keynote address to the Singapore Airshow Aviation Leadership Summit (SAALS). The theme of the Summit is 'Reimagining Aviation's Future'.

De Juniac highlighted the lack of airport capacity in Jakarta, Bangkok and Manila as his top concerns in the Asia-Pacific region. "At the other end of the spectrum, we have Seoul's Incheon Airport. They recently added runway and terminal capacity without raising charges for airlines and passengers. And, Incheon has extended an airport charges discount introduced two years ago. This sets a very positive example for other airports to follow. It also demonstrates great understanding of the role aviation plays in linking the Korean economy to economic opportunities globally," said de Juniac.

"The Singapore government is also showing great foresight with its expansion plans for Changi Airport, including Terminal 5 (T5). But there are challenges. We must ensure the plans for T5 are robust enough to meet the high standards of airline operations and passenger convenience users of Changi Airport have come to expect. And we need to get the funding model right to avoid burdening the industry with extra costs. The prize to keep in sight is the airport's contribution to Singapore's overall economy," said de Juniac. There have been reports on plans to introduce a tax on passengers and increases in charges to fund the construction of Terminal 5. The airline industry does not support pre-funding to finance in advance infrastructure projects.

Ensuring sufficient and cost-efficient infrastructure in Asia-Pacific is a top priority. The region is center stage of the industry's overall growth. By 2036 we expect 7.8 billion people to travel (up from 4.3 billion expected in 2018). Of the 3.5 billion trips to, from or within the Asia-Pacific region in 2036, 1.5 billion will touch on China. As early as 2022 China will be the largest single aviation market. India is another emerging power-house—even if it will take longer to mature. And nearly equal potential could be realized as the Indian aviation market continues to develop.

In his keynote address, de Juniac also identified five fundamental areas that need to be protected when reimagining the industry's future, the theme for SAALS:

Open Borders: "Aviation needs borders that are open to people and trade. The ASEAN single aviation market is an important development. I would like to imagine a future for aviation where airlines are as free as possible to meet the demands for connectivity. We must be a strong voice in the face of protectionist agendas," he said.

Global Standards: "A common set of rules underpins the aviation industry's success—in everything from safety to ticketing. And I would like to imagine a future where global standards continue to be strengthened by the cooperation of airlines and government through institutions such as the International Civil Aviation Organization and IATA," said de Juniac.

Sustainability: "Our commitment to cut emissions to half of 2005 levels by 2050 is ambitious. And I would like to imagine a future where our net carbon impact is zero." Industry and governments have agreed on a Carbon Offsetting and Reduction Scheme for International Aviation (CORSIA) as one of its four pillars in a common strategy to ensure aviation meets this responsibility.

Profitable: "I would like to imagine a future where airlines generating normal profits is the norm, not a rarity." 2018 is the ninth year of profitability since 2010, and the fourth consecutive year in which the return on invested capital is expected to exceed the cost of capital.

The Singapore Airshow Aviation Leadership Summit is co-organized by IATA, Singapore's Ministry of Transport, the Civil Aviation Authority of Singapore, and Experia Events.

Find out more in Alexandre's speech or read the Op-ed.