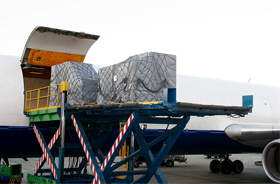 Geneva - The International Air Transport Association (IATA) released data for global air freight markets showing that demand, measured in freight tonne kilometers (FTKs), rose 1.7% in March 2018, compared to the same period the year before. This was five percentage points lower than the February result and the slowest pace of growth in 22 months.

The year-on-year increase in capacity, measured in available freight tonne kilometers (AFTK) fell to 4.4% compared to 6.3% in February. This was the first time in 20 months, however, that annual capacity rose faster than demand.

The sharp growth slowdown is principally due to the end of the restocking cycle, during which businesses rapidly increased their inventory to meet unexpectedly high demand. A softening of global trade is also evident.

"It's normal that growth slows at the end of a restocking cycle. That clearly has happened. Looking ahead we remain optimistic that air cargo demand will grow by 4-5% this year. But there are obviously some headwinds. Oil prices have risen strongly, and economic growth is patchy. The biggest damage could be political. The implementation of protectionist measures would be an own-goal for all involved—especially the US and China," said Alexandre de Juniac, IATA's Director General and CEO.

All regions except Latin America reported year-on-year declines in growth in March, with Africa in negative territory.

African FTKs fell by 3.4% in March. This result may, however, be influenced by the comparison with unusually strong growth in March 2017. Indeed, Africa has reported the fastest growth of all regions for 17 of the last 18 months, so it would be premature to suggest this is the start of a negative trend.

Asia-Pacific carriers reported FTK growth of just 0.7% compared to the same period a year ago. Export orders in Japan and Korea have fallen in recent months and the region remains particularly exposed to the impact of protectionist measures.

European airlines FTKs rose 1.0% in March compared to March 2017. A stronger Euro and a softening of export orders in Germany partially explain the result, but the seasonally-adjusted trend in FTKs has been slowing in recent months.

Latin American airlines posted growth of 15.5% in March compared to a year ago, the only region to improve on its performance compared to February 2018. Freight volumes in the region have been recovering over the past 18 months, in part due to the better performance of the Brazilian economy.

Middle East carriers saw growth of 0.8% in March compared to March 2017. This is consistent with the general weakening in regional performance over recent months, and in particular may reflect an especially strong March 2017 result.

North American carriers' freight volumes expanded 3.9% compared to March 2017. The US inventory-to-sales ratio has risen in 2018, indicating the boost to cargo growth from restocking is over.