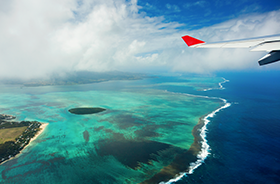 Port Louis - The International Air Transport Association (IATA) called on the government of Mauritius to continue to focus on aviation as a strategic enabler of the country’s economic and social development.

“The leaders of Mauritius have always understood that air connectivity is vital. As we celebrate the first half-century of the country’s success, let’s keep in mind the critical role that aviation plays as a pillar of the economy. And let’s look to the next fifty years with a comprehensive strategic focus on maximizing the benefits of aviation for this island nation,” said Alexandre de Juniac, IATA’s Director General and CEO in a keynote address to Aviation Day Mauritius which is marking the 50th year of Mauritian independence.

“The key elements of any aviation strategy are safety, global standards, competitiveness and cooperation. But Mauritius and other small island states have a critical competitive advantage in implementing an aviation strategy—and that is size. The country is small enough to rally the aviation universe—the airlines, the airport, the tourism infrastructure—to agree a strategy and to get it implemented quickly and nimbly,” said de Juniac.

“The goal of a comprehensive aviation strategy is to enable aviation to drive economic and social development. That will mean a successful future for Air Mauritius—the home-town carrier that serves the market as a lifeline. And it will create opportunities for other carriers to augment the prosperity that aviation brings with robust competition,” said de Juniac.

Key elements of a comprehensive aviation strategy would include:

IATA encouraged Mauritius to take a leadership role in fulfilling its Abuja Declaration commitment to recognize the IATA Operational Safety Audit (IOSA) in its safety oversight regulatory framework. IOSA is mandatory for all IATA member airlines and the 34 African carriers on the IOSA registry are delivering world-class safety levels—three times better than African carriers not on the IOSA registry. “We are already working with Zimbabwe and Rwanda on IOSA recognition. I encourage Mauritius to join them in taking a leadership role,” said de Juniac.

Global standards are the foundation of international civil aviation. This includes the industry’s responsible approach to managing its climate change impact. The Carbon Offsetting and Reduction Scheme for International Aviation (CORSIA) will stabilize emissions from 2020. “As an island nation, the potential consequences of climate change—including rising sea levels and severe weather—are very real. So I encourage Mauritius to show solidarity and join the 70-plus states participating in CORSIA from the voluntary period,” said de Juniac.

Mauritius ranks high in many categories of the World Economic Forum’s Travel and Tourism Competitiveness Report. This includes a fourth-place ranking (behind Malta, Singapore, and Iceland) for prioritization of travel and tourism in government policy. But it ranks 116th on price competitiveness largely driven by ticket taxes, airport charges and fuel costs. “These are big pain points for airlines. Policies to improve competitiveness in these areas would boost aviation’s ability to deliver its economic benefits,” said de Juniac.

IATA urged dialogue with the airlines as Mauritius embarks on a project to more than double the capacity of Sir Seewoosugur Ramgoolam Airport to 9 million passengers annually. “The airport is probably the most valuable few kilometres of concrete ever poured on this island. The return on the investment for the economy is immense. There must be an open dialogue with the airlines to ensure that development provides sufficient capacity, technical excellence aligned to airline needs and affordable costs,” said de Juniac. IATA urged the establishment of an independent regulator to ensure that infrastructure costs are kept competitive.

“Mauritius has impressive connectivity. But there are many markets that have still to discover Mauritian hospitality. And no single airline can provide the connectivity that is needed. Partnerships with other airlines are enhancing the nation’s connectivity,” said de Juniac.

“Mauritius is well-placed to grow its footprint in Africa. It is accessible—only requiring visas from six African countries. Cooperation with South African Airways and Kenya Airways opened two gateways into the African continent. And the Single Africa Air Transport Market creates the potential for even broader connectivity. For sure Africa’s development will demand increased air connectivity with Asia’s important markets. Could Mauritius evolve as a one-stop hub, efficiently connecting Southern African markets to points in Asia-Pacific?” said de Juniac.

“We know that aviation brings in the tourists, that it connects us to family and friends, and that it is a catalyst for economic, social and educational ties. The post-independence success story that is Mauritius today would be very different without connectivity that can only be facilitated by air. Aviation is the business of freedom—and that includes the freedom to develop,” said de Juniac.