Healthy Passenger Demand Continues in 2018 with Another Record Load Factor 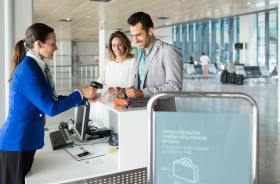 Geneva – The International Air Transport Association (IATA) announced global passenger traffic results for 2018 showing that demand (revenue passenger kilometers or RPKs) rose by a healthy 6.5% compared to full-year 2017. Although this represented a slowdown compared to the 2017 annual growth of 8.0%, it was another year of above-trend growth. Full year 2018 capacity climbed 6.1%, and load factor edged up 0.3 percentage point to a record 81.9%, exceeding the previous high set in 2017.

December RPKs rose 5.3% against the same month in 2017, the slowest year-over-year pace since January 2018 and a continuation of the trend that saw demand growth decelerate to an annualized rate of 5% over the course of the 2018 second half compared to a 9% pace in the first half.

“2018 was another year of strong passenger demand, as aviation continued to support the global economy. We expect similar, if somewhat moderating performance in 2019. Nevertheless, slowing growth in the second half of 2018, coupled with concerns over issues including Brexit and US-China trade tensions, are creating some uncertainty to this positive outlook,” said Alexandre de Juniac, IATA’s Director General and CEO.

International passenger traffic in 2018 climbed 6.3% compared to 2017, down from 8.6% annual growth the year before. Capacity rose 5.7% and load factor climbed by 0.4 percentage point to 81.2%. All regions recorded year-over-year increases in traffic, led by Asia-Pacific. However, North America and Africa were the only two regions to post stronger demand growth in 2018 compared to the prior year’s performance

Domestic air travel climbed 7.0% last year, which was unchanged from the rate in 2017. All markets showed annual growth, led by India and China, which both posted double-digit annual increases. Capacity rose 6.8% and load factor was 83.0%, up 0.2% percentage point compared to 2017.

“Aviation continued to demonstrate why it is the Business of Freedom in 2018. We safely transported more than 4.3 billion passengers. These people used air connectivity to conduct trade and business, reunite with friends and loved ones, explore the world, and, in some cases even to begin new lives. Aviation makes the modern world possible, but we depend on borders that are open to people and trade to be effective. In 2019, we will be strong advocates against a rising tide of protectionism and trade conflict, so that the Business of Freedom can continue to do its part to make the world a more prosperous and happier place,” said de Juniac.