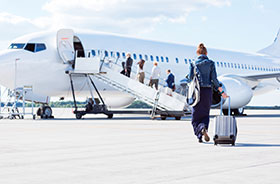 Geneva – The International Air Transport Association (IATA) announced global passenger traffic results for June 2019 showing that demand (measured in revenue passenger kilometers or RPKs) rose by 5.0% compared to June 2018. This was up slightly from the 4.7% year-over-year growth recorded in May. June capacity (available seat kilometers or ASKs) increased by 3.3%, and load factor rose 1.4 percentage points to 84.4%, which was a record for the month of June.

"June continued the trend of solid passenger demand growth while the record load factor shows that airlines are maximizing efficiency. Amid continuing trade tensions between the US and China, and rising economic uncertainty in other regions, growth was not as strong as a year ago, however," said Alexandre de Juniac, IATA's Director General and CEO.

June international passenger demand rose 5.4% compared to June 2018, which was an improvement from 4.6% annual growth recorded in May. All regions recorded increases in growth, led by airlines in Africa. Capacity rose 3.4%, and load factor climbed 1.6 percentage points to 83.8%.

European airlines saw traffic rise 5.6% in June compared to June 2018, in line with 5.5% demand growth the month before. Capacity climbed 4.5% and load factor rose 1.0% percentage point to 87.9%, tied with North America as the highest among the regions. The solid growth occurred against a backdrop of slowing economic activity and declining business confidence in the Euro area and UK.

Middle Eastern carriers posted an 8.1% demand increase in June compared to the same month last year, which was well up on the 0.6% annual increase recorded in May. The timing of Ramadan which fell almost exclusively in May this year likely contributed to the strongly contrasting outcomes. Capacity rose 1.7% and load factor jumped 4.5 percentage points to 76.6%.

Asia-Pacific airlines' June traffic rose 4.0% compared to the year-ago period, which was down from a 4.9% increase in May. US-China trade tensions have impacted demand in the broader Asia-Pacific-North America market and also within the inter-Asia market. Capacity rose 3.1% and load factor edged up 0.7 percentage point to 81.4%.

Latin American airlines experienced a 5.8% rise in traffic compared to the same month last year, up slightly from 5.6% annual growth recorded in May. Capacity increased by 2.5% and load factor surged 2.6 percentage points to 84.0%. Weakening economic conditions in a number of key countries in the region could mean a softening in demand going forward.

African airlines' traffic soared 11.7% in June, up from 5.1% in May. Capacity rose 7.7%, and load factor jumped 2.6 percentage points to 70.5%. Demand is benefitting from a generally supportive economic backdrop, including improved economic stability in several countries, as well as increased air connectivity.

Demand for domestic travel climbed 4.4% in June compared to June 2018, which was a slight slowdown from 4.7% annual growth recorded in May. Led by Russia, all of the key domestic markets tracked by IATA reported traffic increases except for Brazil and Australia. June capacity rose 3.1%, and load factor climbed by 1.1 percentage points to 85.5%.

Brazil's domestic traffic fell 5.7% in June, which was a worsening from the 2.7% decline recorded in May. The sharp drop largely reflects the collapse of the country's fourth largest carrier, Avianca Brasil, which had around a 14% market share in 2018.

India's domestic market continues to recover from the demise of Jet Airways, with demand rising 7.9% in June compared to the year-ago period.

"The peak summer travel season in the Northern Hemisphere is upon us. Crowded airports are a reminder of the vital role aviation plays in connecting people and commerce. For those traveling on journeys of discovery or reuniting with loved ones, aviation is the business of freedom. But aviation relies on borders that are open to trade and people to deliver its benefits. Ongoing trade disputes are contributing to declining global trade and slowing traffic growth. These developments are not helpful to the global economic outlook. Nobody wins a trade war," said de Juniac.