Living up to the Legacy of the Chicago Convention 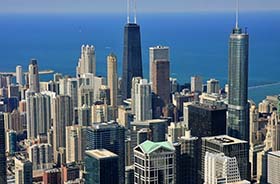 3 September (Chicago) The International Air Transport Association (IATA) urged aviation stakeholders to continue to be guided by the spirit of the 1944 Convention on International Civil Aviation, known as the Chicago Convention, in responding to the challenges facing aviation today and in the future.

“Seventy-five years ago, as World War II still raged, a group of far-sighted individuals met in Chicago and laid the foundations enabling the development of our globally interconnected and interdependent world through aviation. Today, aviation has become the business of freedom, liberating us to pursue our dreams and fulfill our hopes, while powering economic growth and development,” said IATA’s Director General and CEO, Alexandre de Juniac. In the United States, aviation supports 6.5 million jobs and contributes $779 billion to GDP including aviation-supported tourism, according to IATA’s just released report on the Value of Air Transport in the US (pdf).

Speaking at IATA’s Wings of Change Americas conference here, de Juniac outlined principles to ensure aviation continues to live up to the legacy of the Chicago Convention. In addition to maintaining safety as the industry’s highest priority, de Juniac urged aviation stakeholders to focus on:

“Environmental sustainability is the greatest challenge to our industry’s license to spread the benefits of air connectivity. We are already helping people to fly sustainably. The environmental impact of an individual traveler has been cut in half compared to 1990, and we have decoupled emissions growth from underlying traffic growth.

“Now we are moving forward on our interim goal of capping net CO2 emissions through carbon-neutral growth. Since 1 January, airlines have been tracking their emissions and they will begin reporting them to governments in 2020 under CORSIA, the Carbon Offsetting and Reduction Scheme for International Aviation, agreed by member states of the International Civil Aviation Organization (ICAO). Carbon offsetting through CORSIA is expected to mitigate around 2.5 billion tonnes of CO2 and generate over $40 billion in climate finance between 2021 and 2035.”

De Juniac said that aviation is also working towards its 2050 target of achieving a 50% reduction in net CO2 emissions compared to 2005. Sustainable aviation fuels (SAF) potentially will play a huge role, but for that to occur, governments need to enact policies supporting commercialization of SAF. Advances in airframes and propulsion systems such as the development of all-electric and hybrid-electric aircraft, will also play a big part in cutting aviation’s emissions in half by 2050. It will also require operational improvements and greater efficiency from air navigation services providers.

However, de Juniac cautioned that the rise of anti-aviation sentiment poses an immediate challenge to efforts to grow aviation’s benefits, while addressing its climate responsibilities.

“Governments, particularly in Europe, are piling on so-called environmental taxes that penalize airlines and air travelers but do little to support industry efforts to reduce emissions. I have yet to see any aviation environmental tax actually being used to help reduce aviation’s environmental impacts.”

Turning to the need for a pro-competition policy framework, de Juniac said, “Competition unleashes innovation and helps drive prices lower. This is what occurred following airline deregulation. Subsequently, we’ve seen how removing barriers to international competition through Open Skies agreements has also spurred the market and benefitted consumers.” He cautioned against efforts to turn back the clock on deregulation through consumer rights rules whose costs exceed their benefits, citing Canada’s Air Passenger Protection Regulations as an example.

De Juniac also highlighted the need for adequate affordable infrastructure.
“Critically congested airports are spread the world over. New York, Sao Paolo, London, Amsterdam, Mumbai, Bangkok and Sydney are all examples of airport bottlenecks due to capacity constraints—both real and artificial. Bottlenecks, whether on the ground or in the air, lead to delays and inefficiencies, and these result in excess fuel burn and CO2 emissions.”

The US is better positioned than most in terms of its infrastructure capacity but costs are a concern. The US already ranks 100 out of 136 countries in terms of its travel and tourism cost competitiveness, according to the World Economic Forum. A proposal in Congress to almost double the cap on airport passenger facility charges (PFCs) will raise ticket prices and reduce the country’s cost competitiveness even further.

“This proposal to permit airports to increase the PFC comes despite the fact that there is no airport funding crisis in the US,” de Juniac said. “Furthermore, taxes and fees on airline tickets, including PFCs, already account for around $64 of a typical $300 ticket, or 21%. Congress should reject this proposal that will unnecessarily and unfairly increase the financial burden on air travelers,” de Juniac said.