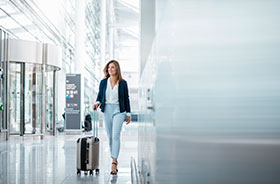 
​(Geneva) - The International Air Transport Association (IATA) announced global passenger traffic data for August 2019 showing that demand (measured in total revenue passenger kilometers or RPKs) climbed 3.8% compared to the year-ago period. This was above the 3.5% annual increase for July. August capacity (available seat kilometers or ASKs) increased by 3.5%. Load factor climbed 0.3 percentage point to 85.7%, which was a new monthly record, as airlines continue to maximize asset use.

"While we saw a pick-up in passenger demand in August compared to July, growth remains below the long-term trend and well-down on the roughly 8.5% annual growth seen over the 2016 to Q1 2018 period. This reflects the impact of economic slowdowns in some key markets, uncertainty over Brexit and the trade war between the US and China. Nonetheless, airlines are doing a great job of matching capacity to demand. With passenger load factors reaching a new high of 85.7% this is good for overall efficiency and passengers' individual carbon footprint," said Alexandre de Juniac, IATA's Director General and CEO.

August international passenger demand rose 3.3% compared to August 2018, improved from a 2.8% year-over-year growth achieved in July. With the exception of Latin America, all regions recorded increases, led by airlines in Africa. Capacity climbed 2.9%, and load factor edged up 0.3 percentage point to 85.6%.

Asia-Pacific airlines' August traffic increased 3.5% compared to the year-ago period, which was an acceleration compared to a 2.6% rise in July. However, this remains well below the long-term average growth rate of around 6.5%, reflecting slowing economic growth in India and Australia as well as the impact of trade disputes. Capacity rose 3.9% and load factor slid 0.4 percentage point to 82.8%.

European carriers saw August demand climb 3.7% year-to-year, fractionally up over a 3.6% increase for July. Capacity rose 3.4%, and load factor climbed 0.2 percentage point to 89.0%, which was the highest among regions. Slowing economic growth in key markets such as the UK and Germany, as well as uncertainties and disparate business confidence outcomes are behind the softer conditions for the continent's air carriers.

Middle Eastern airlines posted a 2.9% traffic increase in August, which was an increase from a 1.7% rise in July. While this was better than the average of the past twelve months, it remains far below the double-digit growth trend of recent years. Falling business confidence in parts of the region, combined with some key airlines going through a process of structural change and geopolitical tensions are all likely to be contributing factors. Capacity increased 1.3%, with load factor rising 1.3 percentage points to 82.4%.

North American carriers' international demand rose 2.5% compared to August a year ago, up from a 1.4% increase in July. Capacity rose 1.3%, and load factor grew by 1.0 percentage point to 88.3%. As with the Middle East and Asia Pacific, this performance represents an improvement from July, but remains relatively soft compared to long-term norms, most likely reflecting trade tensions and slowing global demand.

Latin American airlines experienced a 2.3% demand increase in August compared to the same month last year, down from a 4.0% annual growth in July. Argentina's financial and currency crises, combined with challenging economic conditions in Brazil and Mexico, contributed to the depressed performance. Capacity fell 0.3% and load factor surged 2.1 percentage points to 83.9%.

African airlines' traffic climbed 4.1% in August, up from 3.2% in July. This solid performance comes after South Africa – the region's second largest economy – returned to positive economic growth in Q2 2019. Capacity rose 6.1%, however, and load factor dipped 1.4 percentage points to 75.6%.

Australian airlines' domestic traffic slipped 0.4% in August compared to August a year ago, which was a reversal from a 0.7% annual increase in July. Economic growth in Australia slipped to its lowest level in several years during the second quarter.

Russian airlines saw domestic traffic climb 6.0% in August, down from 6.8% growth in July and below the long-term average growth rate in the market of around 10%.

The 40th Assembly of the International Civil Aviation Organization (ICAO) ended last week with significant progress made by governments in support of the industry's environmental goals. The Assembly passed a resolution that reaffirmed and strengthened its support for the successful implementation of the Carbon Offsetting and Reduction Scheme for International Aviation (CORSIA)—the world's first global carbon offsetting scheme—that begins in 2020. It also directed the ICAO Council to report to the next Assembly on options for the adoption of a long-term aspirational goal for reducing carbon emissions from international aviation.

"It's been 10 years since the aviation industry agreed a long-term goal to cut aviation emissions to half the levels of 2005 by 2050. This Assembly marks the first time that ICAO member states have agreed to consider a long-term goal for governments to reduce aviation emissions—a move that is strongly welcomed by airlines, who recognize that sustainability is critical to earning aviation's license to grow and to continue spreading its many economic and social benefits.

"From 2020—with the help of CORSIA—the sector's growth will be carbon-neutral. And with the strong support of governments in areas such as commercializing sustainable aviation fuels and improving the efficiency of air traffic management, we will continue working toward our long-term goal," said de Juniac.