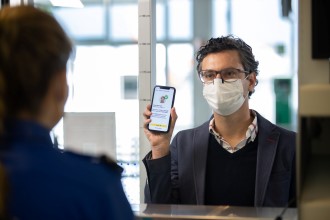 Duplicate checks and lack of verification tools provided to airlines will cause unnecessary airport queues and longer processing times if not addressed by Member States.

Brussels - Ahead of the 01 July deadline for Member States to implement the EUs Digital COVID Certificate (DCC) system – the crucial enabler for the restoration of freedom of movement within Europe - airlines and airports are warning of major operational risks due to the inconsistent approach by Member States in applying the DCC across Europe. In a letter sent yesterday to the EU Heads of State (pdf), the industry urged leaders to harmonise DCC verification standards and protocols, to avoid unnecessary airport queues and ensure a smooth passenger experience.

While the European Commission has worked closely with industry and delivered in record time the adequate framework allowing for common and fully interoperable DCCs, no less than 10 different national approaches and solutions are currently under review across the EU. Combined with a lack of full and effective integration of the DCC in the passenger journey, as well as duplication of document checks (average check-in processing times, for example, have increased 500% to twelve minutes per passenger[1]) -- the current state of play threatens the success of this summer’s air travel restart and will undermine free movement of citizens across the EU. These issues have just been flagged by the European Commission, which yesterday issued recommendations and guidance to EU states to address them.

In particular, verification of the DCC must take place well in advance of departure and ahead of passengers arriving at the airport (‘off airport’), together with Passenger Locator Forms (PLFs) and without duplication of checks.

“With the peak summer travel season upon us, the EU thankfully now has a number of tools and measures available to enable and support the restarting of air connectivity, alongside travel and tourism. We need Member States to urgently implement these tools in a harmonised and effective manner. We view these as essential prerequisites to travel, to avoid long passenger queues and waiting times which would create new health hazards and inevitably result in operational issues for airports and airlines”, said the four associations in their joint letter to Heads of State.

To ensure a smooth travel restart, airlines and airports continue to urge all Member States to:

European aviation remains one of the sectors hardest hit by the pandemic. According to the latest EUROCONTROL forecast, aviation is not expected to make a full recovery before 2024[2] at the earliest. Passenger traffic across the EU/EEA/Swiss airport network was still down by -77%[3] in early June compared to pre-pandemic levels. Similarly, the recovery in air connectivity is proceeding at a slow pace, with over 5,600 air routes[4] lost this month compared to June 2019. On the other hand, the desire to travel is strong, with 61% of Europeans’ surveyed wanting to travel between now and the next two months. In addition, passengers support digitalisation processes: 89% want globally standardised COVID-19 test or vaccination certifications[5].

About A4E (Airlines for Europe)

Launched in 2016, Airlines for Europe (A4E) is Europe’s largest airline association, based in Brussels. The organisation advocates on behalf of its members to help shape EU aviation policy to the benefit of consumers, ensuring a continued safe and competitive air transport market. With more than 720 million passengers carried in 2019, A4E members account for more than 70 per cent of the continent’s journeys, operating more than 3,000 aircraft and generating more than EUR 130 billion in annual turnover. Members with air cargo and mail activities transport more than 5 million tons of goods each year to more than 360 destinations either by freighters or passenger aircraft. Follow us on Twitter @A4Europe.

ACI EUROPE is ‘the Voice of Europe’s airports’, representing more than 500 airports in 46 countries. ACI EUROPE’s members account for over 90% of commercial air traffic in Europe, welcoming 2.4 billion passengers and handling 21.2 million tons of freight. ACI EUROPE’s member airports committed in 2019 to achieve Net Zero CO2 emissions for operations under their control by 2050

The International Air Transport Association (IATA) is the trade association for the world’s airlines, representing some 290 airlines or 82% of total air traffic. We support many areas of aviation activity and help formulate industry policy on critical aviation issues.