We have a busy morning. So I will get to the point. We have a problem in Europe that the Commission must take a leading role in fixing.

Air transport is at the heart of a value chain that is critical to Europe's economy. Airlines directly contribute US$45 billion to Europe's GDP.

Efficient air transport is critical for European businesses to be globally competitive. In fact, it is a catalyst for the Lisbon Agenda:

Europe's airlines have re-invented themselves to be more efficient.

You are all aware of the difficulties that air transport has faced since 2001.

Consumers benefited with a 30% drop in real term prices for air travel in the last decade. To deliver this to consumers, everything has been re-engineered.

Airlines in a competitive environment delivered on the Lisbon Agenda.

There is no reason why infrastructure partners cannot achieve what the airlines have achieved.

Some air navigation service providers have delivered results. The weighted Average unit rates for Eurocontrol member states reduced by 12.5% between 2003 and 2006.

The problem is that too many of Europe's airports are not playing their role in Lisbon. 15 of the 25 most expensive airports in the world are in Europe. Airlines and their customers pay US$14.5 billion to European airports.

But the devil is in the detail. Some airports are moving in the right direction with double digit decreases between 2001 and 2004.

Manchester is the best-in-class performer and a model for the Lisbon agenda. Unfortunately, many more airports are moving in the wrong direction with double-digit increases between 2001 and 2004.

Compare that to airline operating costs per passenger for 2001 to 2005. 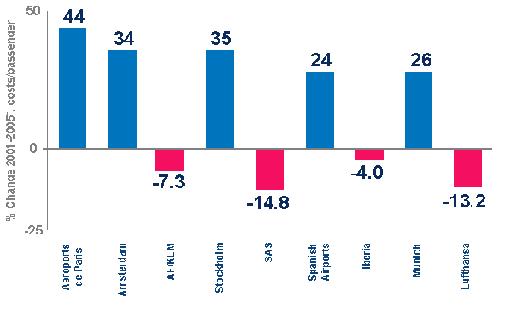 Quite frankly this chart is an embarrassing example of airport monopolies living in the dark ages.

And they are a call to action for the commission.

Economists agree on how to deal with monopolies. Professor David Begg, Director of the Centre for Transport Policy at Robert Gordon University, said it best. "We cannot guarantee that private management will be efficient unless it is subject to effective competition and challenge, either from other competitors in the market-place or from a tough and watchful regulatory body."

What am I asking you? To drive the Lisbon Agenda with results on airport efficiency! What does that mean?

Airports must achieve all of this with greater cost efficiency. Impossible?

Where do we go from here?

We need results—not process. What should it achieve? Four things:

1. Take politics out of airport management

4. And above all, act as a substitute for competition ensuring continuous improvement on cost efficiency

This is not a big request.

Any business subject to competition takes beating inflation as a matter of survival.

Transparency is critical—and there is little on the airport side. The airports have the numbers, but they do not want to share. But regulation must bring transparency to

Remember our best-in-class airport—Manchester. It is regulated and producing results. And the terms of reference for the UK regulator are very similar to what I have just outlined.

The UK model is not the only option.

But it is a useful reference for regulation with teeth. Clearly it is more effective than the phantom regulation process in France, Germany and the Netherlands that has allowed massive cost increases.

Second, we need quick action because the situation is rapidly changing and we are at a critical moment with two major developments:

My message is not complicated. We all agree that Europe must become more competitive. Airlines are on board with the Lisbon Agenda and delivering impressive results.

Too many of Europe's airports are not contributing to the success of the Lisbon Agenda.

If the Commission is serious about the Lisbon agenda it must act now.

Efficiency is our common agenda.

A European Directive on Airport Charges is the tool.

And effective, independent national regulation with teeth is the answer.