Good morning. I don’t want to repeat the remarks that I have just made in my Report on the Air Transport Industry. But, before I take your questions, I would like to highlight a few key issues.

You will have seen the outlook announcement for today. We expect the industry as a whole to generate some $29.3 billion in net profit this year. And for the first time in our records (possibly in history) the airline industry as a whole will earn its cost of capital. This is positive news.

What’s changed the industry’s fortunes? Many assume that the fall in fuel prices was the main driver. Of course it has helped. But the 20% appreciation in the US dollar has moderated this to a very large degree for many airlines. And a significant amount of the fuel spend is hedged at higher than market level. The strongest driver of improved profitability is efficiency. This year we expect airlines to fill 80.2% of their seats—a record high load factor that shows how much progress has been made in fine-tuning and focusing the business.

The second element of the outlook that I must ask your special attention to is the fact that the industry’s performance is far from uniform. Some airlines are doing well. North American carriers are contributing over half of the industry’s profit—about $15.7 billion. But many airlines are still facing huge challenges. Overall, even though $29.3 billion may seem like a large number, it is on revenues of $727 billion. So it is a hard-earned 4.0% net profit margin.
To illustrate even further the contrasting realities, look at what airlines will be making on a per passenger basis which is on average $8.27. Some are doing better than that. Those in North America will make more than double that--$18.12. The Middle East carriers will also do better than the industry average with a per passenger profit of $9.30. In contrast, the average European carrier will make $6.30 per passenger. In Asia Pacific it is $4.24. And for Latin America and Africa it is $2.27 and $1.59 respectively.

It is a good year for the industry, running an airline is still a very tough business.

Many of the challenges that the industry faces center around the role that governments are playing. I highlighted that in my remarks to the AGM.

With that, I will open up for your questions. 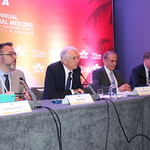 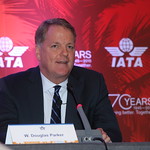 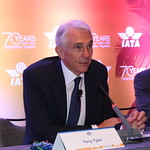