Thank you for the invitation to address you today. I understand that this is the first meeting of the CII National Committee on Civil Aviation.

I am relatively new as IATA’s DG. Today is my 50th day and I am very pleased to visit India early in my time at IATA. It is a strategically important country and my team have informed me well about IATA’s solid partnership with CII over many years. It is a partnership that makes much sense because it is important to present aviation’s issues as a critical part of what is needed for a country’s economic and social development.

Indeed, India’s air transport sector is contributing to the country’s social and economic development with 8 million jobs and $72 billion in GDP.

I know that the air transport industry here has been through particularly tough times. It is good to see that many Indian airlines are now posting profits. But the sector is still in loss territory with many challenges. The debt burden is massive. Regulations are onerous. Taxes and charges are high. And there is uncertainty in the business environment. It’s tough to run an airline, as I know from first-hand experience.

The good news is that demand is strong. The domestic market has been expanding at an annualized growth rate of 20% or better for 20 successive months. The quality of domestic connectivity is clearly improving. Compared to last year, the number of flight frequencies are up 9% and airport pairs—or routes served—have grown by 7%.

In 2026—just a decade from now—we expect India to be the third largest market in the aviation world. It means jumping ahead of Germany, Spain, Japan and the UK. And in real numbers, the 120 million passengers on routes to/from/within India will more than double to 278 million.

For business people India’s potential is exciting. But that potential will not be realized without a supportive policy framework. So I congratulate Minister Raju, Secretary Choubey and all who helped in framing India’s first civil aviation policy. It contains some very encouraging elements. These include developments on open-skies, code-sharing, self-handling and foreign direct investment (FDI). On the latter, India has actually jumped the queue to become one of the most progressive nations by allowing 100% FDI in airlines.

The policy also contains areas where I believe we all have concerns. Like the mandating of hybrid till for regulation of airports and the plans for a levy to cross-subsidize regional flights. But I won’t get into those details today. I look forward to engaging in a comprehensive dialogue with the government on what needs to change once the policy has had time to “mature”.

We should also recognize that a civil aviation policy needs broad alignment across government---beyond the purview of the Ministry of Civil Aviation. Key to that is the government’s initiative to improve competitiveness by making India an easier place to do business.

Another area which must be watched very carefully is the performance of India’s airports.

Some issues are old, like the ongoing capacity crunch in Mumbai. With ground work just beginning, delays in the construction of Navi Mumbai keep pushing relief further into the future. And some are new. Recently, for example, we have seen divergence from the Worldwide Slot Guidelines (WSG) in Delhi and Mumbai. The WSG is a global standard. To be effective and fair, the WSG must be applied uniformly—everywhere, including India.

For today, I would like to focus on the role of public-private-partnerships.

Anyone who has been a frequent international visitor to India appreciates the tremendous improvements in airport infrastructure. For travelers arriving in Delhi, Mumbai, Bangalore or even Kolkata the world of 2016 bears very little resemblance to the experience a decade ago.

The government believed that such massive investments in a short-time scale were beyond what it could deliver. And, as we all know, private interests were invited to participate through the awarding of concessions. While the result has improved the passenger experience, for airlines the impact has been far less positive.

IATA does not support the privatization of airports. We are also not officially opposed to it. But, if we look at the experience of airport privatization—in India and elsewhere—I am hard-pressed to find an example where the results, overall, have been positive. Let’s not forget that provision of infrastructure is a basic responsibility of governments.

The private sector mindset can add value to airport projects with efficiency, cost-effectiveness, entrepreneurial spirit and so on. But when you introduce those traits into a monopoly business, regulation must be robust. It has to protect the public interest and approximate the commercial pressures that impose those positive behaviors of commercial discipline.

If I am asked to evaluate India’s success at airport privatization, regrettably I cannot rate it highly. 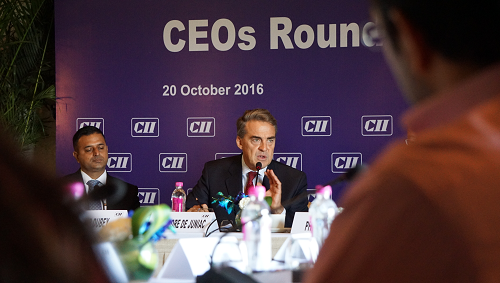 The problems of airport privatization are acute in India. But the situation is not unique. A few weeks’ ago I applauded the Singapore government’s decision not to include private interests in the development of its Terminal 5 because of similar concerns.

By all means bring in private expertise to run the airport. But balance that with the responsibility of the government owners to ensure that decisions are taken which correctly address both national and business interests.

In the case of airports it is a myth to believe that privatization provides access to private capital. As we see in India, airlines and travelers are the source of the capital—often with charging structures that pre-fund the so called “private investments”. When not accessing normal commercial sources of funding, the private owners or concessionaires benefit from this. And the government is happy because it gets its royalty.

In this picture, risk and reward are completely out of balance. Short-term, increased capacity may stimulate growth. But in the long-term rising charges eventually limit the airport’s potential economic contribution to the nation because airlines—operating in extreme competition—need to be able to grow their businesses profitably.

Now, we have to accept that India is already along its journey of private-public partnership in airport infrastructure. And there is no turning back. So the solution is to strengthen the regulatory structure for the airports that are already privatized in order to defend the public interest.

Looking forward, we must learn from the experiences today in consultation with the industry. That will help us to find a way to introduce commercial discipline while fulfilling the government’s responsibility to invest in and develop airports as efficient, fit for purpose assets for the benefit of the consumer.

Lastly, I would like to present an example of what can be achieved when industry and government work in collaboration. Earlier this month a global agreement on climate change was reached by governments at the Assembly of the International Civil Aviation Organization (ICAO). It established a Carbon Offset and Reduction Scheme for International Aviation or CORSIA.

It is a history-making achievement—the first globally agreed mechanism to help manage the carbon footprint of an entire industrial sector.

Solutions to combat aviation’s climate change impact will eventually come from improvements in technology, operations and infrastructure. But a global market based measure—the CORSIA—is needed to achieve our commitment to carbon neutral growth from 2020.

CORSIA begins with a voluntary period (2021-2026). Already some 65 states are committed to participate. These include many developing states—China, Indonesia, Zambia, Kenya and many others. It was a huge disappointment not to have India among them. As India ratified the Paris Agreement in the same week, on Mahatma Gandhi’s birthday, we were hopeful that the spirit of climate leadership would extend to aviation emissions.

To encourage India’s future participation, I will emphasize three points where there has been some confusion:

We continue to urge the Indian government to come on board with the CORSIA agreement and join the voluntary period.

Aviation is a very special industry. The work that we do makes the world a better place. It connects people and links businesses. In doing so, it builds prosperity. I call it the business of freedom.

That business—our industry—has come a long way in India. We—the industry and governments—should be proud of what has been achieved and optimistic about the prospects for the future. But we cannot be complacent. To help realize the vast contribution that aviation can still make to India’s development IATA has one of our biggest country offices here in Delhi. We will continue to work with CII. And I can assure you that India is a priority on my own personal agenda.

Once again, thank you for inviting me to address you today. I wish you great success in your deliberations and your objectives.