Remarks of Alexandre de Juniac at the 2017 Philippines Aviation Day, in Manila

Thank you for the warm welcome to the Philippines. It is a real pleasure to be here for the first Philippine Aviation Day. And special thank you to the Air Carriers Association of the Philippines – Philippine Airlines, Cebu Pacific, Philippines Air Asia, PAL Express and Cebgo who have made great efforts for the success of today.

The aviation community that has gathered here today—including regulators, airports, airlines and others—is a powerful reminder of the complex coordination that makes aviation happen. Alignment among these players is essential for safe, secure, efficient and sustainable air transport.

That's important because aviation is vital to the Philippines in so many ways. With over 7,000 islands, the domestic network binds the country together. And international links are critical to keep families together over great distances, link businesses to global markets and bring in tourists. The economic impact of all this is enormous. And that is clearly visible in the 1.2 million Philippine jobs and $9.2 billion of GDP that is supported by aviation.

This aviation day is an opportunity for stakeholders to align on a plan of action for aviation in the Philippines---a plan that will deliver even greater social and economic benefits. To frame our important discussions today, I would like to briefly share some thoughts on what I see as the top issues facing aviation here. 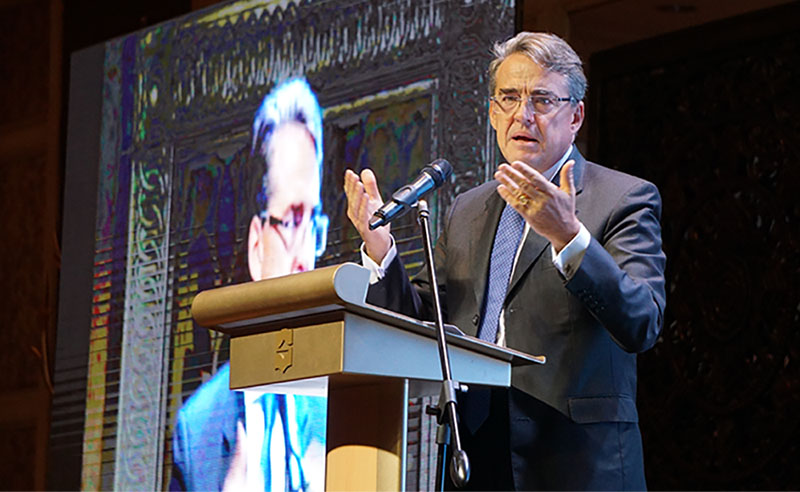 I will begin with the most fundamental—safety and security.

On safety, the industry is pleased to progress towards establishing a National Transportation Safety Board that will strengthen oversight. We are strongly supporting the implementation of a new air traffic management system which enhances safety and capacity through automation. And as these fundamental changes are being made, I encourage the government to consider making IOSA—the IATA Operational Safety Audit—a requirement for all Philippine AOC holders.

IOSA is a requirement of IATA membership. And many governments have already included it in their oversight programs. One of the latest is Australia's Civil Aviation Safety Authority.

Globally aviation remains a target for terrorists and it is a challenge to stay a step ahead of the threats. It is no secret that terrorists have a presence in the Philippines. While we have confidence in the security measures that are in place here, we are proposing a workshop with the Office of Transport Security and the Civil Aviation Authority of the Philippines to review the overall security framework and assess capacity building needs in light of evolving threats.

As an industry we must constantly raise the bar on safety and security. And you can count on IATA as a strong partner in this continuous effort.

As important as aviation is to the Philippines, there is a need for an airport master plan to ensure that growing demand for connectivity can be accommodated. And that is apparent to anybody who arrives at Manila's Ninoy Aquino International Airport (NAIA).

The facilities are no match to the region's other major hubs—Seoul, Hong Kong, Bangkok, Kuala Lumpur or Singapore. The capacity of the airport is meant to be 30 million passengers per year, yet it is handling nearly 40 million. And there has been much more talk than progress on building a solid airport infrastructure foundation for Manila.

Achieving this will be a major challenge---in the short, medium and long-term. And the closer government, airlines and the airport work together, the better the results will be. That cooperation should begin with the development of the next five year master development plan for NAIA.

There is no time to lose. Siting, designing, building and financing a new airport and the connecting infrastructure is easily a ten-year project. And it is hard to see how even the most aggressive possible incremental capacity expansion plan of NAIA will be able to adequately cope with the growing demand.

Keep in mind that every landing that cannot be accommodated is lost money and opportunity for the Philippine economy—tourist and investor dollars that will go elsewhere. So we must act quickly.

It is equally important to act wisely and avoid mistakes made in other parts of the world. Many governments turn to the private sector when infrastructure needs to be expanded urgently. It's a short-term fix that brings long-term pain if the regulatory structure is not clearly focused on the airport's important role as an economic catalyst.

Airports are most successful when the needs of their customers—the airlines—are met. What do airlines need? Essentially it is three things:

However the urgent capacity expansion is handled, it is important that there is an effective regulatory framework in place that protects the public interest by focusing on these three goals.

While I am on the topic of regulation, I am deeply concerned about recent developments here.

Aviation is a highly regulated industry. And well-constructed regulation has played a key role in making the industry safe, and reliable. Excessively onerous regulation can also be a huge burden on the ability of aviation to deliver its social and economic benefits.

That's why we are promoting smarter regulation which has some key attributes including:

Smarter regulation is built through meaningful consultation with all concerned parties and is regularly reviewed to make sure that it is efficiently doing what it needs to do.

I see a raft of new consumer protection legislation in the Philippines which does not meet the Smarter Regulation standards. And the first point that I will make is to highlight the consumer benefits that aviation is generating.

That's a great success story by any measure. But proposed legislation on capping air fares, prohibiting overbooking and imposing onerous consumer protections extra-territorially would be a major step backward.

I won't subject you to our detailed argumentation on each piece of legislation. But I will give you a few ideas why we see these proposals as falling short on the smarter regulation scale.

First, aviation is a competitive business. And airlines offer a wide variety of fares at different price points to satisfy consumer needs. And, as just discussed, the overall result has on average been cheaper travel that has encouraged more travelers. Taking away that flexibility with government imposed fare caps would likely have the unintended consequence of reducing deeply discounted fares. If airlines cannot charge a premium for ultimate flexibility, then they will have to cover costs by raising average fare.

Second, on overbooking there is indeed political cache in taking a tough stance. But the reality is that more bookings are made than people who actually fly. Managed overbooking helps fill the plane and keep fares low. Revenue management systems watch closely the trends and adjust their selling accordingly and most times with tremendous accuracy. And when they get things wrong, a flexible market solution, not inflexible regulation, is the answer.

And lastly, the industry fully supports robust consumer protection in line with global standards and smarter regulation principles. But what is being proposed is mis-aligned and oversteps the national boundary. The Montreal Convention and ICAO's principles for consumer protection are the model to follow. And regulators should keep in mind the powerful market forces governing a hyper competitive industry. When things go wrong, airlines have every incentive to make them right because they don't want to lose their customers. And if the consumer is disappointed, they have the ultimate power in their wallets of choosing another airline for their next trip.

Just to be clear, we are not against regulation. And we are not making light of the need to treat passengers well. But there is no need to re-invent in the Philippines frameworks that are already well-established globally.

And that brings me nicely to the last issue that I want to address—the tourism taxes and the proposed Green Fee.

First, the social and economic benefits of tourism are clear to most governments. What also needs to be clear is that tourism in a price sensitive business. Taxing tourist arrivals may bring some short-term budget gains. But those will quickly disappear if tourist arrivals drop.

We have heard rumors that the government may be considering such a tax. To be blunt, increasing the cost of visiting the Philippines would be a mistake. Focus on making wise investments in tourism infrastructure that encourage people to visit. The extra tourist dollars you attract will pay for the investments and make an economic contribution.

We also believe that the proposed Green Fee is misguided. Sustainability is a core responsibility for any business. And aviation is a leader in this area, tackling sustainability challenges with global action.

The combination of our climate change measures will allow us to stabilize net emissions from 2020 with carbon neutral growth. And by 2050 we are committed to cutting net emissions to half of 2005 levels.

So the industry was shocked by the Philippine Government's proposed Green Fee that deviates from these global efforts and agreements. My very strong message to our partners in the government is to abandon the Green Fee and join the 72 states who have committed to join CORSIA from the voluntary period.

I will bring my remarks to a close by reminding people why we are here. As I said at the beginning, aviation is a vital industry—for me it is the Business of Freedom. Knowing that the work we do together makes the world a better place is motivating at an individual level. And it should motivate us collectively as well. By ensuring safety and security, addressing infrastructure deficiencies, aligning regulation to global standards and effectively addressing climate change we can set Philippine aviation on a successful trajectory. And that will be a powerful catalyst for growth and development.