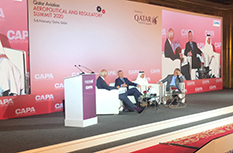 It is a pleasure to join this Summit for a second time. Thank you to CAPA and Qatar Airways for partnering to raise the profile of regulatory affairs.

Aviation is a highly regulated industry. And much of that regulation is founded on global standards. Two months ago, on 7 December, we celebrated the 75th anniversary of the Chicago Convention. Even as the Second World War was raging, governments could see the potential for aviation to “greatly help to create and preserve friendship and understanding among the nations and peoples of the world.”

A few months later—on 19 April 1945—airlines came together with a vision for IATA—an association that would enable air transport “to benefit the people of the world.” Over the next 75 years IATA has promoted safe, efficient and sustainable services.

By working together with governments, the freedom to fly has reached more and more people. In 1945 some nine million people traveled by air. Today we transport that same number of people, on average, every 18 hours.

Regulation, much of it based on global standards, has been an enabler of this great democratization of air travel.

1945 was a very different world. It was four years before the first passenger jet and decades before the computing power of today, Yet the most fundamental principle of the Chicago Convention—that aviation needs global standards to operate efficiently—remains true.

Global standards and regulation have evolved over the decades with the industry. Most of the time this has been a positive evolution. But the industry has also suffered well-intentioned regulatory efforts that have not produced the desired results.

The classic example is the US tarmac delay rule. US regulators wanted to eliminate excessive tarmac delays to improve the travel experience even in difficult situations like extreme weather events. They set the fines so high that long tarmac delays have virtually disappeared. Good result? Not really. Airlines are incentivized to pre-emptively cancel flights rather than risk a long delay. And a cancelled flight is never a good outcome for a traveler!

As I said in this forum last year, airlines are not against regulation. We need “Smart Regulation.” That means regulation that;

I hope that you will agree that this is good common-sense framework for your important discussions at this conference.

I would like to highlight the continued criticality of global standards to this industry some 75 years after the founding of the International Civil Aviation Organization (ICAO) and IATA. And I will give you four specific examples—in the context of various crises that the industry is facing today.

The first is climate change.

This is a crisis that science tells us is caused by carbon emissions. Aircraft burn kerosene that emits carbon. And aviation’s contribution to manmade carbon emissions is 2%—a figure that has been stable in relative terms to other polluters despite the rapid growth of aviation.

In absolute terms, however, aviation’s emissions were growing. And so we committed to cap aviation’s net emissions with carbon neutral growth from 2020. For a carbon intensive industry with no alternative power source to make that commitment in 2009 was a major step. And early on we recognized that achieving this would require the industry to work together with common goals.

One of those goals was to get governments to implement a single global economic measure to help us get there. For sure, the industry would continue to improve technology, operations and infrastructure. We knew that these alone would not be sufficient. And we also knew that our capabilities will be compromised if a patchwork of environmental regulation, taxes and charges emerged.

We were successful. CORSIA—the Carbon Offsetting and Reduction Scheme for International Aviation—was a landmark agreement by governments agreed at the ICAO Assembly in 2016. This was one of my first interactions with the ICAO process, I was impressed by the spirit of ambition and compromise that underpinned the global standard approach and enabling such an important result for our planet.

Governments must now keep their commitment. Too many are inventing taxes in the name of the environment. These siphon money that we could invest in sustainability projects. And they undermine the effectiveness of CORSIA and the political consensus on which it was built.

Looking beyond carbon neutral growth, we have an even tougher 2050 goal—to reduce net emissions to half 2005 levels irrespective of growth.

Infrastructure is another example where global standards are critical to a smooth, efficient industry.

We are facing an infrastructure crisis. There is more demand than capacity. And global standards are helping to manage the available capacity that we have.

By engaging policy makers together we are bolstering the value that this tested system provides—in allocating airport capacity for airlines to serve the needs of their customers in a competitive market that creates opportunity for new entrants.

A consistent, transparent, fair and free slot allocation system is the goal. And that rests on everyone involved in the process—our industry partners and governments—applying the same slot rules at both ends of any route.

And I would add particular emphasis on the need for neutrality or independence of the process. Airport ownership structures continue to evolve—particularly with private sector participation. The coordinator must remain neutral and focused on implementing the WASG. Regulation must support the WASG global standard by requiring transparency and effective capacity declarations as the basis of the coordination process.

I am sure that you will have a good discussion on this topic in tomorrow’s panel.

In the meantime, I’d like to comment on another “crisis” issue—the way that we certify aircraft. The continuing situation with the Boeing 737 Max has raised serious questions.

How could a system of certifying the safety of aircraft, built over decades of continuous improvements in safety, produce an aircraft that had two tragic accidents in such a short time frame?

It is a valid question. And as with any safety issue, the most important action that we can take is to learn from what happened and apply that learning to make flying even safer.

Boeing is hard at work providing regulators with the information and answers needed to bring the 737 MAX back into service. Each regulator has the responsibility for doing this in their individual market. And there is no doubt that they are taking this responsibility diligently.

From a public confidence perspective, the greater the alignment of requirements and timelines the better.

Looking ahead, we must keep this in mind when considering any improvements to the way that aircraft are certified. Regulators must be able to trust and mutually recognize their certifying colleagues around the world. If not, what is the public supposed to think. Afterall, they use air transport to fly from one jurisdiction to another. Surely it must be considered as safe where it lands as where it takes off.

The same is true from a very practical perspective. When we introduce new technology, the design requirements always include improvements in safety, efficiency and environmental performance. We need a system that can bring these benefits to market in a timely manner without compromising safety.

The last example is the issue that is top of mind globally today—containing the novel coronavirus (2019 nCoV).

Viruses are nasty things. And the world has a lot of experience with them.

It should come as no surprise—and give great reassurance—that we have a global framework to help contain outbreaks. These are the International Health Regulations (IHR)—built under the leadership of the World Health Organization (WHO).

The global mobility that aviation creates is a factor in virus spread. So we work closely with the WHO with the objective of being able to operationalize what public health authorities need us to do.

We have also defined industry standards to keep our passengers and crew safe and healthy. This includes guidance for crew, front line, cleaning and maintenance staff, among others. And these are endorsed by WHO, and in some cases included, in the IHR.

The effectiveness of these standards is assisted by several factors:

The WHO’s recent declaration that we are in a Public Health Emergency of International Concern is part of the IHR plan. It did not mean the people’s individual safety had taken a turn for the worse. Rather it indicated that the scale of the situation requires governments to cooperate to contain and hopefully eliminate the virus.

The best minds in the world on outbreaks have used our previous experiences to build the IHR for precisely this occasion. Some countries—China among them—are taking extraordinary measures to contain the virus. If there is a needed further call to action, it would be to:

My last thought on this topic is to highlight that aviation is an industry that rises to challenges.

As of Sunday 2 February, the Civil Aviation Administration of China, or CAAC, has reported that over 4,000 relief flights performed by commercial airlines in China delivered over 600,000 pieces of virus prevention materials to affected areas. Chinese airlines have also helped bring some 7,500 medical staff to where they are needed. And airlines are helping with the evacuation of foreign nationals from the affected areas, the delivery of samples to labs, the transport of experts to areas in distress and much more.

I usually conclude my speeches with a reminder that aviation is the business of freedom. In the context of the virus outbreak, I challenged myself if this was still appropriate. And I came to the conclusion that it is.

The freedom that aviation provides is critical to the world in which we live. With the help of good regulation, we constantly improve safety, efficiency and sustainability. We have a critical role to play in containing and eventually solving this current crisis.

History shows us that the demand for the freedom to fly is ever-growing. The next months will certainly be challenging for the air transport industry and for governments. Together we will get through the virus outbreak. And together we will continue to build the global standards and regulations that will enable this industry—the business of freedom—well into the future.