Sustainable Aviation Fuels (SAF) are a key topic of conversation at this year’s AGM and WATS. SAF could represent up to 65% of emission reductions by 2050 in the net zero commitment the industry took at last year’s AGM in Boston. “A few years ago, this conversation would have never happened on stage” said Bryan Shebarcow, CEO of Alder Fuels.

In 2021, the industry used every single drop of the more than 100 million liters of SAF that were produced. This number only represents 0.1% of all fuel consumption in the industry. More can be done, but this represents a massive step forward compared to a few years ago. The demand is strong and is a clear signal to policymakers and producers that the industry is committed and the groundwork has been laid.

From an airline perspective, Katja Kleffmann, Head of Fuel Management Supply at Lufthansa, explained the challenges that her company faces in sourcing SAF: “costs are high, availability and supply are challenging, and so are the regulations.” Despite that, airlines are committed and called for increased policy incentives to create a much more robust market to serve the industry.

Investments in infrastructure, the need for scalable new solutions, pathways and feedstock, retrofitting existing refining capacities – all these topics were addressed during the conversation, recognizing that while there is momentum around SAF, there still is a lot of work to do to increase supply, availability, reduce costs and importantly, raise awareness among airline customers of the role of SAF, and the possibility to buy some, especially for corporate travelers.

“Airlines have done an incredible job and have committed to using SAF and invested in the supply of it. To reach the next level, we need more policy support from governments which will provide market confidence.” Reaching agreement on the Long Term Aspirational Goal at the upcoming 41st ICAO Assembly in September will be the perfect signal to unlock further investments that are needed, scale up production and create stable policies to support the airline industry on its journey to net zero by 2050.

> Back to AGM Highlights 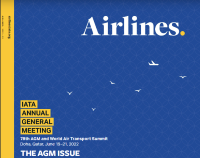