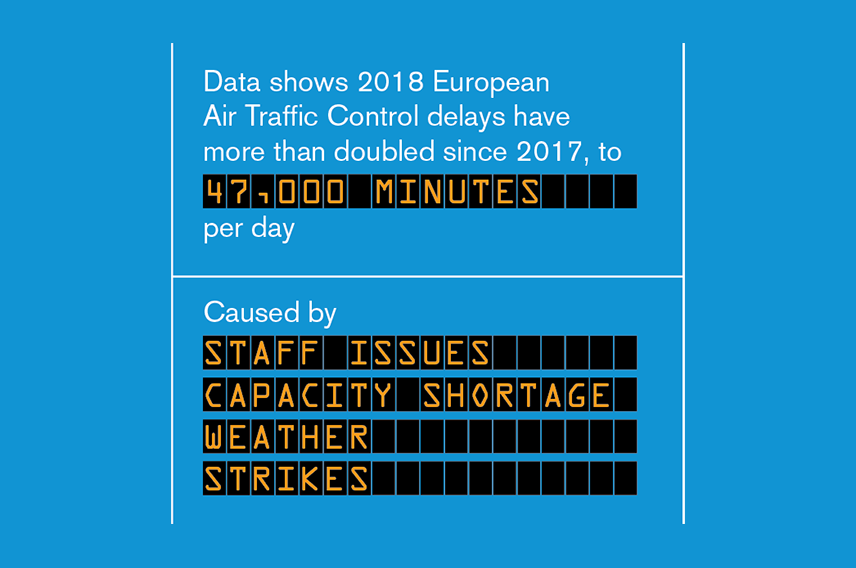 As an unprecedented heatwave has collided with the summer holiday season in Europe, we’ve seen air traffic control delays rising even faster than the temperature.

In July, IATA warned that air traffic control-related delays were running twice 2017 levels, averaging 47,000 minutes every day. Take a look at this infographic we prepared, which gives more detail.

The delay is galling enough, but it gets worse. We know that the air navigation service providers (ANSPs)—or their government owners—are sitting on a pile of cash which airlines (and passengers) have paid. That money is supposed to have been invested to get rid of the bottlenecks creating these delays.

“It’s not a small sum of money – more than €7 billion is due to be paid to ANSPs next year,” says Peter Curran, IATA’s Assistant Director for ATC Charges. ”And while many airlines, operating in a highly competitive market in Europe, struggle to make a profit, monopoly ANSPs are making an average margin of 9.6%. In many countries, the government simply pockets this money, instead of using it improve capacity in the system. Meanwhile, the delays are getting worse.”

IATA is addressing the problem on multiple fronts. The first approach is to work with ANSPs to put in place urgently measures to address delays in the near term. IATA has a four point plan but central to solving the capacity crisis is that ANSPs must modernize outdated work practices so that staff are deployed when they’re required; and, where justified, recruit additional staff.
The second approach, is that on behalf of all the airlines (whether members of IATA or not), Peter Curran and his colleagues work hard to get ANSPs to account better for their over-flight charges and spending. His team saved more than €200 million last year.

The third front is the implementation of national airspace strategies. “The agreements struck so far with Poland, France, Italy, Bulgaria and Spain are all about sitting down and working as a team to ensure the right investments are made for the future,” says Curran. “We are hopeful that we can agree a strategic approach that will mean less waste of money, and a better service for passengers.”

The European Commission, Member States and ANSPs must take urgent action on the following: