Industry Leaders Discuss Sustainable Aviation alongside Summit of the Americas 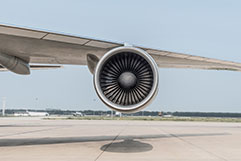 Los Angeles –The International Air Transport Association (IATA), in cooperation with Boeing, hosted a roundtable on sustainable aviation in the context of the IX Summit of the Americas which is being held from June 6-10, 2022 in Los Angeles under the theme of “Building a Sustainable, Resilient, and Equitable Future.”

Representatives from various stakeholders in the aviation value chain along with government representatives came together on 6 June 22 to address challenges in meeting the net-zero 2050 goal adopted at the 77th IATA Annual General Meeting (AGM) last year.

The event served as an opportunity to highlight the potential of the region to develop and expand a Sustainable Aviation Fuel (SAF) industry and called upon Heads of State to develop sound policies to incentivize the production of SAF across the Western Hemisphere.

In opening the event, Peter Cerdá, IATA’s Regional Vice President for the Americas, reminded the participants of aviation’s valuable contribution to the socio-economic development across the region.

Coupled with the fact that across this continent, few viable alternative modes of transport which provide essential connectivity for both people and goods exist, moving forward the priorities need to be:

“To reach the industry’s net zero goal, governmental support is critical to developing policies that efficiently accelerate the commercial production and deployment of SAF. There is momentum among governments, airlines, airplane manufacturers, fuel producers, and NGO partners to work collectively towards achieving net-zero goals. In addition to the United States, the governments across the region, including Brazil, Canada, Chile, Colombia and Mexico are pursuing sustainable aviation policies with support from IATA’s member airlines,” Cerdá said.

Landon Loomis, Vice President, Latin America, Caribbean & Global Policy at Boeing, highlighted the strategic importance of holding the event alongside the Summit of the Americas. “The message from the experts at the roundtable is clear: in addition to a sector-wide partnership, it takes policy commitments, technology deployment and infrastructure efficiency improvements to achieve the industry’s commitment to reach decarbonization by mid-century.”

To support the SAF roundtable, John Kerry, Special Presidential Envoy for Climate for the United States, shared a message, reminding everyone that “reducing emissions from hard to decarbonize sectors, like aviation, is essential to tackling climate change.  I am encouraged by the commitments of airlines worldwide to scale up the use of sustainable aviation fuels, which have the potential to not only significantly reduce emissions in-sector but also to provide economic opportunity.”

Demonstrating their commitment to achieving net-zero carbon emissions by 2050, seven airlines from across the Americas will be using SAF for commercial flights from Los Angeles International Airport (LAX) during the week of the summit. Together with Boeing, Aeromexico, Alaska Airlines, American Airlines, Copa Airlines, Delta Airlines, United Airlines, and WestJet purchased 100,000 gallons (379,000 liters) of SAF, representing a reduction in CO2 emissions of 472,500 pounds (214,300 kilograms). The fuel is being supplied by Los Angeles-based low-carbon solutions provider World Energy.

The global air transport industry adopted a goal of achieving net-zero carbon emissions by 2050 in October 2021. Attaining this will require a combination of maximum elimination of emissions at the source, carbon offsetting, radical new aircraft and engine technology, and carbon capture technologies.

SAF could represent up to 65% of the emissions reduction pathway set forth by the industry, highlighting the vital importance of SAF production and use. This will require a massive increase in production in order to meet demand as SAF is either not commercially developed in most countries or produced at a small scale across the Americas.

> Recording of the SAF roundtable session during Summit of the Americas