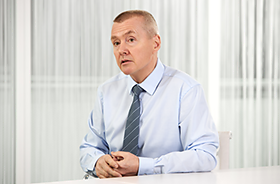 Good afternoon, everybody, I just have a short presentation to give you an update on what we're seeing in July. The good news is the recovery continues and passenger recovery is gaining momentum. And as you would expect, we continue to see growth in both the domestic and the international markets.  The July figures show that the cargo business is still roughly around where it was in 2019. So a solid performance from cargo. Domestic has seen a strong recovery, principally due to China—the domestic market rebounding-- and I'll show you some figures on that in a moment. International traffic is now  32% down on where it was in 2019. Overall, we're at about 75% of where we were in 2019. So making a solid recovery as we go through the summer season in the Northern Hemisphere.

You can see in this seasonally adjusted cargo index back to January of 2020 it shows the continuing strong performance of the cargo business. We've seen very strong performance in Latin America in July. There is some disruption still because of the war in Ukraine. That's taken a lot of capacity out of the European market, and we continue to see some disruption in supply chains. But in general, cargo performance continues to perform well. Slightly down in July and from where it was in July of 2019.

Moving on to the next slide, you can see here in the domestic markets that very strong V shaped recovery that I mentioned in China, that's the red bar at the bottom. So domestic markets continue to perform well. It's very encouraging to see that China is beginning to move again, internally, at least. And I think that's hopefully a sign of positive developments in relation to China. But all domestic markets are performing strongly now as we go through the rest of 2022 versus 2019.

The next slide shows international traffic. You can see the Asia Pacific region lagging significantly behind. This is seasonally adjusted going back to January of 2020. If I look at July, traffic within the Asia Pacific region was at about 35% of where we were in 2019. And looking at some of the major traffic lanes from Asia, within Asia, it's at about 25% of where it was in 2019. Europe to Asia is just under 40%, (about 38%). We're seeing Middle East to Asia picking up now at about 68%. But it's the area of the world that's lagging most behind. We're seeing good steady progress in other regions.

This chart we've shown before, and what you can see here is the very high crack spread. That's the difference between the basic Brent oil price and the jet oil price. And this is at levels I don't recall ever seeing before. I think last week the crack spread was about 50%. I looked back over the 10-year period up to 2019, where it averaged about 17%. And as you know fuel represents the single biggest cost in an airline's cost base. So although you've seen the Brent oil price ease a little, jet oil prices are still very, very strong, very elevated. And that will continue to put pressure on the airline cost base as we go through the rest of the year.

We had expected this crack spread to reduce as more jet fuel supply became available. But clearly the recovery in demand is stronger than the recovery in the production of jet fuel, and hence that elevated crack spread that we're witnessing. So, hopefully we'll see this moderate a little bit as we go through the rest of the year. But clearly it is a challenge for all airlines. We do see some hedging in the industry. And I'm aware of some airlines that have embarked on hedging in recent months where they hadn't been previously hedged, just to provide themselves with some protection against the volatility that we're witnessing in the jet oil prices at the moment.

Just one last slide, which I think supports what we've been saying: strong forward bookings - the international in red and domestic in blue - so the recovery is gaining some momentum. We've seen good traffic figures through the peak summer in the Northern Hemisphere, and domestic markets now recovering well with the increased activity in the Chinese domestic market. And we expect this now to continue into the August and September figures, given the positive trends that we're seeing in forward bookings. So I think a good story, both on the passenger and cargo side of the business, and clearly some challenges ahead, particularly with the fuel price. But a positive outlook for the industry at the moment