It is difficult enough for the airline industry battling a pandemic which has shut down 80% of global demand, without also finding its hands are tied by regulators bungling the issue of slots. But that is precisely the situation we find ourselves in. Bad policy decision-making on slot use relief is risking long-term damage to air transport networks in Europe and beyond, making recovery of global connectivity all the harder.

Airlines have always needed some flexibility on slots in order to manage operational issues. This has long been recognized by regulators, who have adopted an ’80-20 rule’ whereby a series of slots must be operated 80% of the time. Clearly when demand is down 80%, greater flexibility is required – otherwise, unnecessary flights to destinations where demand is non-existent will occur. This is why for the first year of the crisis the 80-20 rule was suspended. And to reinstate a significant threshold now, above say 30%, would be a clear policy failure. Yet that is the prospect facing the industry today.

The principle architect of this potential slot policy failure is once again the European Commission. Since the beginning of the crisis they have dragged their feet on providing swift, unambiguous slot relief, which is a recognized and completely standard response in times of temporary demand crisis. It is ironic that the regulator, which should have the greatest technical appreciation of the issue, seems to understand less than the politicians, who have grasped the reality of the situation. Time and again it has been the European Parliament and the Council which has brought sanity to the proceedings (such as the essential ability for airlines to make early slot returns this summer season).

The Commission, threatening to insist on a 60% slot use threshold for the Winter without the ability to make early slot returns, is reading far too much into a temporary summer bump in intra-EU traffic. In recognizing the welcome if far from robust recovery in intra-EU traffic this Summer, the Commission have missed the point that it was precisely the flexibility offered by the relaxation of the Summer slot rules that has enabled airlines to respond with adaptable schedules and routes to where demand is strongest.

The need for this flexibility is perhaps summed up best by this chart looking at the booking profile of flights from the UK to Portugal. Demand surges when Portugal is added to the UK’s ‘green list’ – then collapses again when restrictions are reimposed. It is this kind of uncertainty that airline schedulers are wrestling with, and an inflexible slots system will make this much harder.

Even if the Summer reaches the traffic levels the Commission supposes, it is far from certain that this improvement will be maintained into the Winter. Equally important is the fact that much of the traffic relevant to slot-constrained airports is long-haul traffic. This – as the chart below makes clear – is at present set to be even lower than the feeble levels reached last winter, a period during which a full waiver of the slot rules was agreed. 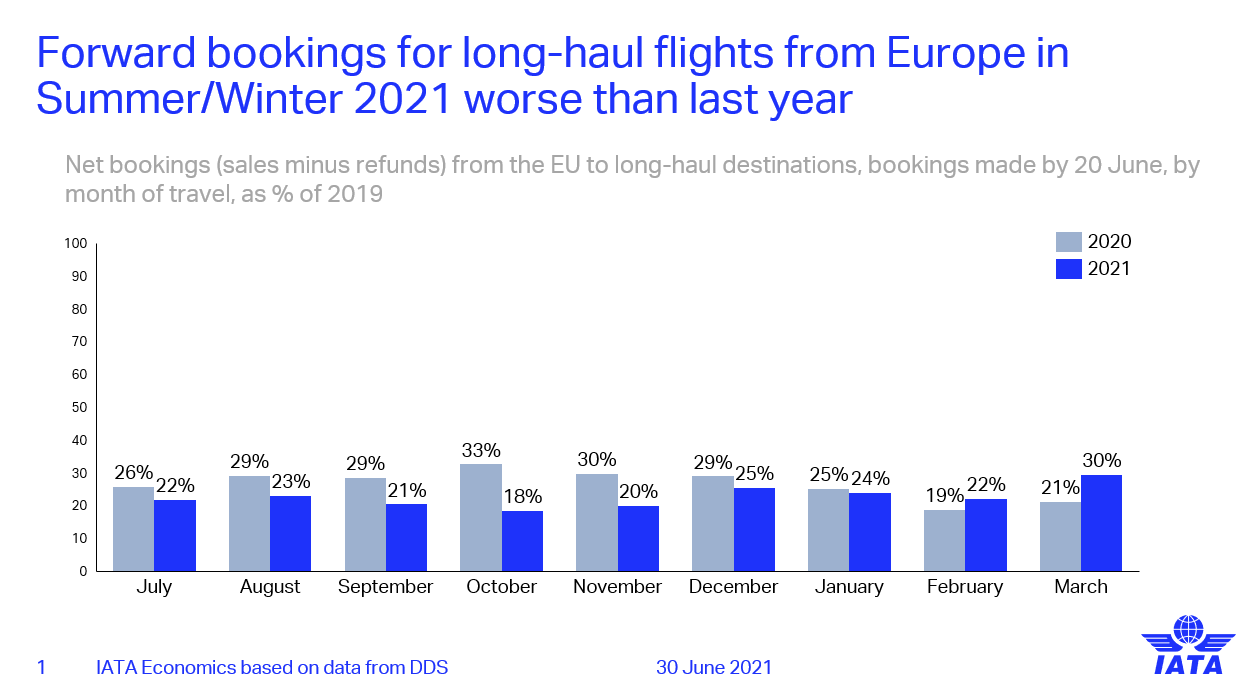 Despite this evidence, the EC is once again threatening chaos with their insistence that the industry is already as good as fully recovered, a conclusion for which no convincing data exists. So why does their proposal of a 60% slot use threshold matter? Why should anyone care about this? In short, it would mean:

It is a mystery to us why the EC is the only regulator that consistently fails to appreciate the scale of the continuing crisis, and the vital importance of preserving the slot system for the post-pandemic aviation world. One reason might be that a small minority of carriers argue that the existing slot rules somehow undermine competition. But this is a smoke screen. In fact, under the current rules and situation, new carriers claims for access to airports are being met. The bottom line is that over the last 20 years route numbers have doubled, while prices have halved, during a period of minimal airport capacity growth. That shows that the Worldwide Airport Slot Guidelines must be doing something right.

Airlines are far from alone in pushing back against the Commission’s misguided proposal. Many key EU Member states support a 30% slot use threshold. And many EU airports also agree with a low threshold as they understand the negative impact removing relief too soon would have on their carriers and hub structures.

The Worldwide Airport Slot Board, which comprises representatives from airlines, airports and slot coordinators, has developed a global agreement for gradually restoring the original slot rules as traffic slowly recovers from the pandemic. Many regulators around the world – with the exception of the EU – have accepted this expert solution, or continued to provide a full waiver of the rules, recognizing the continued uncertainty facing air transport.

The European Commission is delivering bad policy based on a misunderstanding of the global air traffic system and the role of global slot rules. They are relying on selective evidence and failing to consult meaningfully with industry. Once again, we call on the Council and Parliament to intervene, save the Commission from its mishandling of the Slots Delegated Act, and give Airlines a fighting chance to plan a sustainable recovery for the Winter and beyond.