Good morning. It is good to see so many of our media colleagues reporting on the air transport industry.
Many of you have just heard my opening speech. So you have heard my comments on the importance of the industry and our commitment to continue to deliver safe, secure and sustainable global connectivity that is so important to modern life and the global economy. I also spoke to the need for our relationship with governments to evolve so that we have

Before I take your questions, I would like to review some highlights from our outlook announcement.
We anticipate that airlines will make an aggregate profit of $3 billion on $631 billion in revenues. That is a 0.5% margin.

This will be the third consecutive year in which profits are cut basically in half—from $15.8 billion in 2010, to $7.9 billion last year and now $3.0 billion this year.

Although the bottom line result is the same as we expected in March a lot has changed in the interim.
The price of oil has softened. In March the consensus opinion was that Brent would average $115/barrel for the year. The January to May average was just under $118. But recently it is trading just below $100. The consensus is now for an average price of $110 for the year.

This is some welcome relief, but with three big caveats.

First, even with oil at $110/barrel, fuel will consume 33% of operating costs. Only 10 years ago this cost was in the 13-14% range. So even with some softening,  fuel prices today still represent a huge challenge for airlines.

Second, the fuel price is a challenge with very little predictability. If the situation with regard to Iran deteriorates, we could see oil prices rise sharply again.

Third and most important, the reason that fuel prices have softened is the expectation of continued weak economic performance—primarily in Europe where the sovereign debt crisis continues to deepen. Our forecast takes into account a worsening of the situation in the Eurozone. Although, should it evolve to a full-blown banking crisis, the outlook obviously becomes much gloomier.

The good news is that people are traveling. Despite the economic uncertainty, April passenger traffic was up 6.1%. Even cargo has seen a 2% volume improvement since November—most of which was captured by the Middle East airlines.

That last point illustrates the differing performance that we see around the world.

European carriers are at the center of the economic uncertainty and suffer from governments that are eager to tax and over-regulate but are largely unable or unwilling to build airport capacity or deliver the much-needed Single European Sky. They are expected to lose $1.1 billion.

The North American carriers, on the other hand, are tightly managing capacity in a very mature market. We see them making $1.4 billion.

Asia-Pacific will contribute the most to industry profits with $2.0 billion. The optimism that we see here in China is largely behind this industry-leading performance. The government sees aviation as a workhorse driving the Chinese economy and is building impressive infrastructure to accommodate—indeed to facilitate—the growth. Of course, China is also facing some economic challenges reflected in a slowing of GDP growth. But it certainly  still is the star in the world economy.

Latin America and the Middle East will see profits of $400 million each. The regional economies in both are strong. But our colleagues in Africa will see losses of about $100 million.

Our Chief Economist will give a more detailed outlook presentation at lunch time.

I will conclude my remarks with two last thoughts.

First, I expect that you will hear much talk about the European Emissions Trading Scheme (ETS) over the next day or so. Everyone wants a global approach to market-based measures and nobody wants a trade war. ICAO can deliver the solution. But this can only happen if Europe defuses the situation with an action that will make them sincere participants in the process.

Second, aviation is highly taxed in many parts of the world. Last week, UK Prime Minister David Cameron stated that "cheap air travel and being able to use your mobile phone all over Europe" had done far more to "establish a European identity" than the European parliament or the blue and yellow EU flag combined. I understand Chancellor Angela Merkel agreed with the comment. This shows an understanding of the powerful force for good that aviation can be. The challenge is to get these same politicians to follow-up with a more reasonable tax burden. The UK’s Air Passenger duty at GBP 2.6 billion is the highest tax on aviation anywhere. And the recently introduced German departure tax takes about a billion more Euros from the industry. In these difficult economic times I again encourage governments to focus on our potential to drive economic growth. 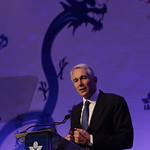