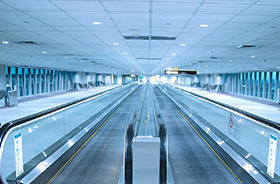 Montréal – A new Memorandum of Understanding (MoU) was signed today at the Airports Council International (ACI) North America/World Annual General Assembly, Conference and Exhibition by and between ACI World, the International Air Transport Association (IATA) and the City of Atlanta, the owner and operator of Hartsfield-Jackson Atlanta International Airport (ATL). The MoU will see ATL as the first airport in the United States to participate in the Smart Security project.
Smart Security is a joint program between ACI and IATA, on behalf of their respective members, and in collaboration with governments and industry stakeholders, that aims to define new concepts in passenger security screening at airports. The program’s goal is to strengthen aviation security while increasing operational efficiency and improving passenger experience. In Atlanta, some of the goals are to improve the checkpoint environment including queuing and repacking areas; to implement passenger tracking and queue management; and, to test innovative security lane configuration, including automation and design.
The Signatories’ intention is to share information and expertise regarding innovations in passenger and cabin baggage screening, conduct practical operational testing and evaluation of Smart Security components at the airport. Trials will be conducted in collaboration with the Transportation Security Administration.
“The 2015 ACI World Annual Traffic Report ranks ATL as the world’s busiest airport in terms of passenger traffic,” said Angela Gittens, Director General, ACI World. “As such, the results and lessons learned from ATL’s Smart Security pilot will make an invaluable contribution to the project and the Smart Security Guidance Material, which will ultimately benefit all airports in the deployment of Smart Security concepts.”
“Smart Security solutions have been successfully implemented in airports across Europe with significant benefits to all stakeholders. And ongoing trials in Australia, the Middle East and Canada are looking positive,” said Nick Careen, Senior Vice President Airports, Passenger, Cargo and Security, IATA. “We are excited to see ATL assuming a leadership role in bringing these concepts to the United States. This partnership is an important step toward realizing a new global model of airport security that will improve the experience for passengers while boosting the efficiency of security checkpoints.”
“We are honored to become the first airport in the United States to participate in the Smart Security project,” said Roosevelt Council, Jr., Interim General Manager, ATL. “Participating in the program will allow us to obtain vital data that will further increase operational efficiency here in Atlanta and will provide guidance and direction for other airports across the country.”
For more information, please contact:
Corporate Communications
Tel: +41 22 770 2967
Email: corpcomms@iata.org

1. Airports Council International, the trade association of the world’s airports, was founded in 1991 with the objective of fostering cooperation among its member airports and other partners in world aviation, including the International Civil Aviation Organization, the International Air Transport Association and the Civil Air Navigation Services Organisation. In representing the best interests of airports during key phases of policy development, ACI makes a significant contribution toward ensuring a global air transport system that is safe, secure, efficient and environmentally sustainable. Learn more about ACI​.
2. IATA is the trade association for the world’s airlines, representing some 260 airlines or 83% of total air traffic. The association supports many areas of aviation activity and helps formulate industry policy on critical aviation issues.