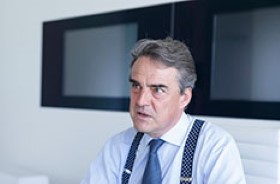 Good afternoon and thank you for joining us today. Exactly one year ago today, on 17 March 2020, we held our first COVID-19 press briefing. I certainly did not expect that we would still be doing them in March 2021.

COVID-19 continues to be a global tragedy. And, what has happened in aviation over the past 12 months has been nothing less than catastrophic. Let me take you through a brief recap of the challenges and progress ….

In sum, there is light at the end of the very long tunnel. More and more people are being vaccinated. While we believe that vaccines will play an important role in opening borders, they are not a silver bullet. Testing will also play a role. That will ensure that those who cannot be, or prefer not to be vaccinated, will have an opportunity to travel.

So, what will it take to get the industry restarted?

There are a few issues that will need to be addressed…..

The first is replacing quarantine with testing/vaccination requirements

So long as governments maintain quarantine requirements, there will be no restart. With ample testing capacity, testing to travel is the first option. And with more and more people being vaccinated, there is a growing population that should be able to travel without restriction.

One key element is still missing—secure digital standards for testing and vaccination certificates. We moved a step closer to this with the latest ICAO CART recommendations which were announced on Friday. This should encourage governments to accept digital certificates. But we still need the global standards being worked on by WHO and OECD. With millions of vaccines already being distributed and the EU committed to its Green Pass, you could say this already is late in coming.

The second is that governments must stay engaged.

This crisis is not over. Normally, I would say that governments should set the rules and let airlines run the business. Fundamentally that is still true. But we would have seen huge bankruptcies had governments not stepped up with over $225 billion of relief.

I see at least two vital roles that governments must play:

Before taking your questions, I have a couple of things to share.

With that, I look forward to your questions.