Cabin Air & Low Risk of On Board Transmission

The quality of supplied air on board an aircraft is much better than most indoor environments. This along with other cabin features including the mandatory usage of masks on board and the requirements around tests and/or vaccination certificates, make the risk of contracting COVID-19 to be very low.

Nonetheless, here are some features about the cabin air quality.

How good is the cabin air?

The risk of transmission in the modern cabin environment is low for a number of reasons: passengers face the same direction, seatbacks act as barriers, air flow is from the top to bottom, and the air is also very clean.

About 10 times more than most office buildings

It includes SARS, which is similar to COVID-19

The direction of the air flow in an aircraft is from top to bottom, and not along the length of the aircraft 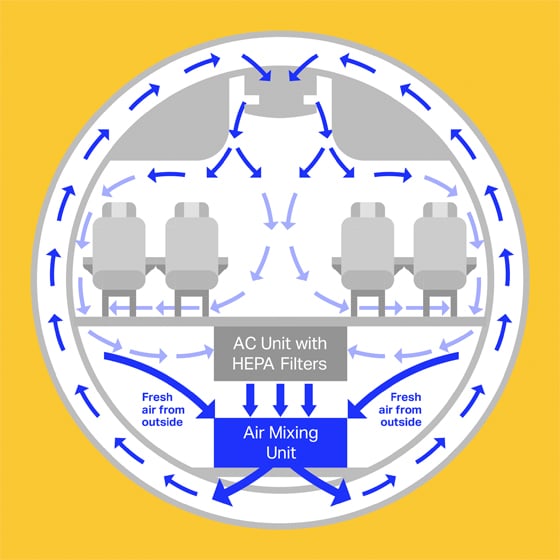 Most modern jet aircraft are equipped with High-Efficiency Particulate Air (HEPA) filters. These filters have similar performance to those used in hospital operating theatres and industrial clean rooms.

These HEPA filters are 99.9+% effective at removing viruses, bacteria and fungi.

Higher rate of air renewal than in other indoor facilities

Researchers at the Harvard T.H. Chan School of Public Health have released a report on COVID-19 transmission and risk mitigation while flying. They found that the multiple layer of measures, including the wearing of face masks and more frequent disinfection, together with the aircraft airflow systems, results in a very low risk of COVID-19 transmission on aircraft.

Research by the US Transcom showed that aerosol particles were “rapidly diluted by the high air exchange rates” of a typical aircraft cabin. Aerosol particles remained detectable for a period of less than six minutes on average. Both aircraft models (B777 and B767) tested removed particulate matter 15 times faster than a typical home ventilation system and 5-6 times faster “than the recommended design specifications for modern hospital operating or patient isolation rooms.”

Mannequins with and without face masks sat in various seats on the aircraft while fluorescent tracer particles were released at intervals of two seconds to simulate breathing for a minute during ground and in-flight tests. Real-time fluorescent particle sensors were placed throughout the aircraft at the breathing zone of passengers to measure concentration over time.

Airbus used computational fluid dynamics (CFD) research to create a highly accurate simulation of the air in an A320 cabin, to see how droplets resulting from a cough move within the cabin airflow. The simulation calculated parameters such as air speed, direction and temperature at 50 million points in the cabin, up to 1,000 times per second. The same tools were used to model a non-aircraft environment, with several individuals keeping six feet (1.8 meters) distance between them. The result was that potential exposure was lower when seated side by side on a plane than when staying six feet apart in an environment such as an office, classroom or grocery store.

Using CFD, Boeing researchers tracked how particles from coughing and breathing move around the airplane cabin. Various scenarios were studied including the coughing passenger with and without a mask, the coughing passenger located in various seats including the middle seat, and different variations of passengers’ individual overhead air vents (known as gaspers) on and off. The modeling determined the number of cough particles that entered the breathing space of the other passengers. Based on the airborne particle count, passengers sitting next to one another on an airplane is the same as standing more than seven feet (or two meters) apart in a typical building environment.

Using CFD, cabin air flow and droplet dispersion models validated in full-scale cabin environment testing, Embraer analyzed the cabin environment considering a coughing passenger in several different seats and air flow conditions in our different aircraft to measure these variables and their effect. The research Embraer completed shows that risk of onboard transmission is extremely low, and the actual data on in-flight transmissions that may have occurred, supports these findings.

Back to Air Travel & Covid-19 Home