How travel inspired my coo​king

Yuko Kobayashi is the chef-owner of Kitchen 5, a popular restaurant in the heart of Tokyo, Japan.

I have always enjoyed international travel. It is a habit that I have had since even before I began running my restaurant in Tokyo for over three decades ago. My personal interest was to follow the “Spice Road”. So I have focused on the Mediterranean and covered most of the Latin Countries—from the Levant through to Southern France and Spain.

Long ago I decided that in principle I would take two long vacations each year—a month in the winter and five weeks in the summer. The central objective of the travel was the pursuit of a personal theme—food!

When I travel, I get up early in the morning to go to the local market. If I was in Spain, I would pretend to be a Spaniard as I stand before the market stalls and think about what I might buy and what I might make with it. And as I was doing that, I would expand my thoughts to the foods of neighboring countries—France or Portugal-which I am also familiar with. Gradually a menu would formulate in my head. And I would often be surprised at how quickly time passes while in these thoughts. When I would go to a restaurant, I always would think about each dish as I was eating. If I had cooked it, would I have done it the same way? What ingredients would I have used? 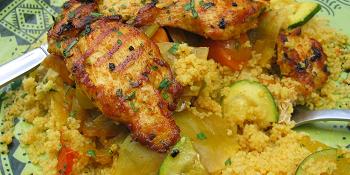 Recently, I have tried to include in my travels opportunities to spend a few weeks of each trip working in restaurants, in an auberge or in the house of a food expert. Even more important than studying the cooking methods is seeing how ingredients are handled and used. It is quite different from how you would do in Japan. Over time, some stereotypes were overturned and the feeling of distance would narrow.

When I started my restaurant some 30 years ago, I wanted to serve food that had not been introduced in Japan. At that time, my place was probably the only one in Japan serving couscous. Many people asked if I was changing the taste to meet the Japanese palate. Absolutely not! I was not even thinking of that. When people travel to exotic places overseas they have an opportunity to try delicious local foods. Delicious food is delicious even if it is not the flavors that you are used to. So when I cook, I want to make what I remembered as tasting delicious.

In globalized food world of today, that is important because we are losing some of the color and character of individual countries or regions. My aim is to make food that only I can make. When I return to Japan I try to make food for my customers that was inspired by my travels.

I also believe that it is really important to cherish regional cuisines that have been passed down through generations. It’s special because you can only eat that dish in that specific part of that specific country. Preparation is often time-consuming but there is something special in cooking and preserved food styles that have been made in the same way in the same climate for years.

I found one example in Sicily. About 20 years ago I traveled there looking for tomato paste made from sun-dried tomatoes. “That stuff! Who still makes it?” I was questioned. Some restaurants still make the effort, but in homes it was pretty much obsolete. There is no substitute for the unique taste, and it is essential for Sicilian cuisine. I found another example in France when I traveled to a village called Meyssac, which is about an hour by car from Brive where the nearest train station was. I traveled there to study cooking from a teacher who was 100 years old. It was winter and it was cold with deep snow. They used fireplaces for warmth and for cooking. And she taught me how to make a famous dish which was called Farcidure. We put salt pork in a pot hanging over the fire. As the pork boiled, we started to make some bread dough. The soup was ready about the time that the dough had risen. After that we removed the pork and dropped the dough into the pot to boil for an hour. And then we had a great rustic meal of bread, boiled pork and mustard.

The bread is known as La Mique. But most of the French guests at my restaurant had never heard of it. And even among those that did, not many had ever experienced it because it is so complicated and time consuming to make. Having made the trip to Meyssac, farcidure is still an important part of the repertoire of food that I prepare for my guests.

One day a Frenchman came to my shop and was very surprised. “What is this farcidure?” he exclaimed in a loud voice. I responded that I had learned to make it in Brive. “I am from Brive. Do you eat this?” he asked. “Of course,” I answered back. That was a very happy memory for me. In fact, it was one of those times when you have a lot of self-satisfaction and you really think “that was great.” I realized at that moment that I would have to continue to make farcidure. And the experience also reminded me what a precious thing international travel is.