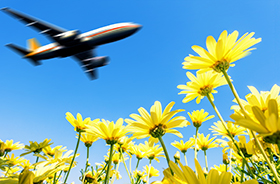 Geneva - The International Air Transport Association (IATA) called for greater urgency in the partnership between governments and airlines to keep aviation at the leading edge of industries in managing their climate change impact.

The call came on the eve of the first anniversary of the historic global agreement on a Carbon Offsetting and Reduction Scheme for International Aviation (CORSIA) at the 39th Assembly of the International Civil Aviation Organization (ICAO).

“CORSIA was a historic demonstration of what can be achieved when governments and industry work together. Implementing it will be a critical enabler of aviation’s commitment to carbon neutral growth from 2020. But our ultimate goal is much more ambitious—cutting net emissions to half their 2005 levels by 2050. Along with implementing CORSIA we must move much faster on key issues such as the development of sustainable aviation fuels and the reform of air traffic management,” said Alexandre de Juniac, IATA’s Director General and CEO.

Specifically, airlines are looking to work with governments in four areas to accelerate the sustainability agenda:

Speaking at the conclusion of the Sustainable Aviation Summit in Geneva, organized by the Air Transport Action Group (ATAG), de Juniac stressed the importance of the vision and leadership that the industry had shown in driving environmental sustainability so far.

“Sustainability is a team effort. Policy is in the hands of governments, but it is strengthened by the expertise, experience and vision that the aviation industry brings to the table. By working together we have a great opportunity to shape the future of an already critical industry. Aviation connects 4 billion passengers a year and in doing so it supports 63 million jobs and $2.7 trillion in economic activity. We have a great responsibility to protect these economic and social benefits for future generations by meeting our climate change commitments. We cannot afford to be complacent about our progress. We must not rest until the Business of Freedom is the Sustainable Business of Freedom,” said de Juniac.