It is a great honor to be asked to address the Australasian Aviation Press Club. It continues a long-standing tradition. From what I can see, I am at least the third IATA DG to do so.

Aviation is an important industry. This year over 4 billion passengers will board planes. A third of the value of goods traded internationally will be delivered by air—over 60 million tonnes. The economic impact of the industry is enormous. It supports $2.7 trillion of global GDP. And 63 million jobs worldwide are associated with aviation.

No matter how you look at them, these are impressive numbers. And they support an important part of IATA's mission to represent, lead and serve the airline industry—convincing governments that the benefits of aviation are well worth fostering with sound regulations and policies.

While I believe strongly that aviation has been a vector for prosperity, I will admit that these enormous numbers were not the reason that I joined the industry. There is something deeper and more fundamental to the value that aviation creates which inspires people in aviation. 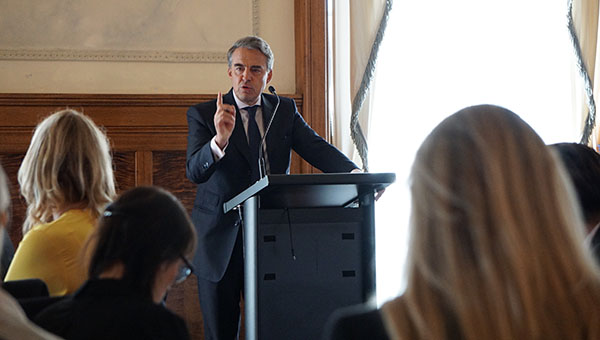 Aviation is the business of freedom.

What does that mean? Every plane that takes off helps people to live better lives. It takes them to where they need to be to learn, to relax, to explore, to work, to be with friends, to trade, to go home or, in some cases, to change their lives.

In the first century of commercial aviation, we have changed the dimensions of our world:

We had a recent reminder of that with the launch of Qantas service between Perth and London. I did a quick online search for fares and you can cover the 14,500 km distance for about A$0.14/km. That's amazing value!

There can be no doubt that aviation has made our world smaller, more prosperous and a better place.

We should not forget that fact—particularly when we see some forces of protectionism looking to move us in the opposite direction. We must continue to be a h3 voice for borders that are open to people and to trade.

As Australians, you live in a wonderful part of the world—a vast land full of possibilities. And aviation has and continues to play a critical role—helping you to show the country off to tourists, welcoming the skills needed to make Australia even h3er, and facilitating vital trade links that underpin prosperity.

So, we were very happy when Alan Joyce, a long-serving member of the IATA Board of Governors, and the team at Qantas invited the IATA AGM to come to Australia. It is a natural fit for a country where aviation is so important. For a third time, Sydney will be the capital of global aviation as it did in 1961 and 2000.

We are expecting about a thousand delegates—including the most senior people from our 285 member airlines, aircraft manufacturers, other key industry suppliers and governments and a solid contingent of the media.

What happens at an IATA AGM? Part of it is focused on our governance processes. There will be some gavel banging, resolutions and other key administrative elements critical to running a global association. That's all on Tuesday.

Monday is what we call the World Air Transport Summit, which is much more issues focused. We will examine important challenges that we must overcome to secure our future…..

We will look to the future and the innovations needed to cope with the growing number of travelers and the possibilities that big data provides.

The highlight of the day puts the spotlight on some of the industry's top CEOs to find out what is on their minds.

The magic of it all is that you will find the CEOs of ferocious competitors coming together to focus on issues of common interest. Their support of IATA continues throughout the year—but come Tuesday afternoon they will revert their attention to competing for the business of the world's travelers and shippers.

State of the Industry

As you can imagine, the frame of mind of the participants will be largely influenced by the state of their businesses. We have some fresh information to share on that.

Yesterday we announced how global cargo markets performed in April. Air cargo is a tough business. In 2017 it experienced a turn-around with over 9% growth after 6 years in the doldrums. April's growth was about half of that—4.1%. In 2017, businesses needed to quickly restock their shelves to meet the demands of a fast-paced uptick in the global economy. That gave air cargo a big boost. That urgency has disappeared. But we are still seeing healthy growth, particularly for cross-border e-commerce and special needs cargo such as pharmaceuticals.

Today we are releasing April passenger traffic numbers. The amazing thing about the whole period post the global financial crisis is how well passenger numbers held up. Even amid great economic uncertainty, people still travelled in even greater numbers. And that continues to today with 6.2% growth in April.

The solid demand growth is one of the reasons why you will see many of the CEOs gathering here in a good mood. But they will certainly also be worried about the rising cost of fuel. In December last year we predicted a record industry profit of over $38 billion for 2018. At that time we were expecting an oil price of $60/barrel for Brent crude. Now it is approaching $80.

In the past, such a rapid rise in a key input cost might have plunged the industry back into losses. As a result of the efforts of the industry to restructure and re-engineer their businesses, we are still expecting solid profits this year. But probably not at the levels we were anticipating in December. On Monday we will release our revised outlook.

Whenever the industry gathers, safety is top of mind. It is our first priority. Last year was one of the best in terms of safety. The industry performed nearly 35 million flights using jet aircraft. And there was not a single fatality. There were five fatal accidents involving turbo-prop aircraft. One tragic cargo accident saw many lives lost on the ground at the crash site. And our thoughts and prayers are with the loved ones of those lost in the Cubana crash.

Every accident is a human tragedy that rededicates the air transport industry to becoming even safer. And I can tell you from my own experience as the former CEO of an airline that you feel the responsibility for the safety and security of your passengers and crew every waking minute of the day.

But there is a challenge in further improving our safety record. Traditionally we relied on the results of accident investigations to guide the majority of our efforts. As these become fewer in number we need to find other sources. Fortunately, we live in the age of big data.

IATA's Global Aviation Data Management program—GADM—is taking a leading role in exploiting the power of data to drive safety improvements. The vision is to identify risks before they can become accidents. We will do that by analyzing GADM data with predictive analysis tools that we are currently developing in cooperation with the Singapore government.

One key data source is the IATA Operational Safety Audit—IOSA—which is celebrating its 15th year of operations. It is a mark of quality for all IATA airlines. In 2017, the safety record of airlines on the IOSA registry was nearly four-times better than that of non-IOSA airlines.

IOSA is providing valuable insight to regulators too. EASA and CASA are the latest regulators to recognize IOSA's value in improving safety. I look forward to signing an MoU with CASA on this at the AGM.

We cannot think of safety without turning our attention also to security. The apprehension of potential aircraft bombers in Sydney last year was a grim reminder that aviation remains a target for terrorists. It also demonstrated the power of coordination among government authorities—something that we would like to see more of.

We also welcome the nearly A$300 million that the federal government has allocated to further improving security at Australia's airports. As this is rolled-out, we must carefully ensure that associated costs don't leak back to the airlines. Security is, after all, primarily a government responsibility everywhere—public parks, local neighborhoods, train stations and airports.

Speaking of airports, you can expect to see lots of discussion on infrastructure at the AGM. We are in a crisis. Demand is rising globally. But investments in airports and air traffic management are not keeping pace.

Australia is a good news story. The OneSKY project will help manage congestion in the sky by taking a holistic view of civilian and military capabilities. We just need to make sure that the expected benefits are realized within an acceptable budget and timeframe. And it is important that the good reputation of Australia in terms of cost-efficiency in air traffic management is not damaged by cross-subsidization by civil aircraft operators for military air traffic management.

The progress at Badgerys Creek is also much welcomed. That it has taken more than a half-century to get to this point illustrates the difficult challenges we face in building infrastructure fast enough.

Now that we have reached this point, the challenge is solid execution. We are very pleased with the level of consultation that continues with the airline community. This includes assurances that airlines will be able to choose the airport they serve and the phased approach to development.

What we need to work on next is a vision for the roles of Badgerys Creek and Kingsford-Smith and the connectivity between the two airports. This will help airlines to plan effectively their future services.

As phase one of Badgerys Creek will not be ready before 2026 there is an urgent need to find ways to use Kingsford-Smith to its full capabilities.

And we need to take a serious look at airport charges in Australia. Last year the ACCC raised concerns about the effectiveness of Australia's price monitoring regulatory regime for airport charges. They were not convinced that it does enough to constrain the market power of Australia's main airports.

And we are working with Airlines for Australia and New Zealand and the Board of Airline Representatives Australia on input to the Productivity Review on Economic Regulation of Airport Services taking place this year. Without getting into the nitty-gritty details, anyone who has traveled knows that it is cheaper today than it was a decade ago. But airlines have not seen similar decreases in their airport costs.

The difference is that airlines operate in a competitive environment and airports have much more market power. So we must find an effective regulatory solution to ensure that Australia is well-served with competitive infrastructure.

With that I will conclude my remarks for today. As this is a press club, I will conclude by encouraging the working media to register for the AGM if you have not already done so. I am sure that you will find lots of interesting stories! And I look forward to taking your questions.