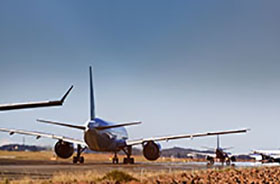 Sydney - The International Air Transport Association (IATA) has called for economic regulation of airports in Australia to be strengthened.

“At a time when we have an infrastructure crisis globally, Australia has a good story to tell. The plans for a new airport at Badgerys Creek are encouraging, as are efforts for cooperation between civil and military authorities to more efficiently use airspace. But we need to take a serious look at airport charges. Last year the Australian Competition and Consumer Commission raised concerns about the effectiveness of Australia’s price monitoring regulatory regime for airport charges. They were not convinced that it does enough to constrain the market power of Australia’s main airports. We agree with the ACCC’s view,” said Alexandre de Juniac, IATA’s Director General and CEO in a keynote address to the Australasian Aviation Press Club.

It is cheaper to travel by air today than it was a decade ago. But airlines and travelers have not seen similar decreases in airport costs. “The difference is that airlines operate in a competitive environment while airports have much more market power. We must find an effective regulatory solution to ensure that Australia is well served with competitive infrastructure,” said de Juniac.

IATA is currently working with Airlines for Australia and New Zealand and the Board of Airline Representatives Australia to provide input to the Productivity Review on Economic Regulation of Airport Services taking place this year.

In his remarks to the AAPC, de Juniac also addressed air traffic management, the Western Sydney Airport, and security.

Air Traffic Management: “The OneSKY project will manage air traffic congestion by taking a holistic view of civil and military capabilities. But we need to make sure the expected benefits are realized within an acceptable budget and timeframe. And there should not be cross-subsidization by civil aircraft operators for military air traffic management,” said de Juniac.

Western Sydney Airport: De Juniac welcomed the progress on the Western Sydney Airport located at Badgerys Creek. “It has taken over half a century to get to this point. Looking ahead, the challenge is solid execution,” said de Juniac. “This includes developing a vision on the roles of Badgerys Creek and Kingsford-Smith and the connectivity between the two airports,” said de Juniac.

“Until Phase one of Badgerys Creek is ready in 2026, there is an urgent need to find ways to use Kingsford-Smith to its full capabilities,” said de Juniac.

Security: “The apprehension of potential aircraft bombers in Sydney last year was a grim reminder that aviation remains a target for terrorists. We welcome the nearly A$300 million that the federal government has allocated to further improve security at airports. As this is rolled-out, we must carefully ensure that associated cost don’t leak back to the airlines,” said de Juniac.

De Juniac is in Sydney for the 74th IATA Annual General Meeting and World Air Transport Summit, which will be held from 3 to 5 June. Over 1,000 aviation leaders from IATA member airlines, industry stakeholders, strategic partners and members of the media are expected to attend the event.