After Challenging Year, Improvement Expected for 2020 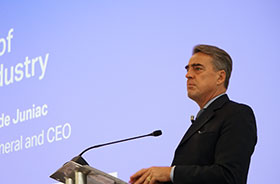 Geneva - The International Air Transport Association (IATA) forecast that the global airline industry will produce a net profit of $29.3 billion in 2020, improved over a net profit of $25.9 billion expected in 2019 (revised downward from a $28 billion forecast in June). If achieved, 2020 will mark the industry's 11th consecutive year in the black.

Highlights of expected 2020 performance include:

Economic performance in 2019 was weaker than had been anticipated at the time of the June forecast. This aligns with weaker global GDP growth of 2.5% (versus 2.7% forecast in June) and world trade growth of just 0.9% (down from 2.5% forecast in June). These negative developments contributed to softer passenger and cargo demand and corresponding weaker revenue growth, as passenger yields fell 3.0% and cargo yields dropped 5.0% compared to 2018.

Operating expenses did not rise as much as anticipated (3.8% vs. 7.4% June forecast) largely owing to lower-than-expected fuel costs; but this was not enough to offset the softness in revenue.

"Slowing economic growth, trade wars, geopolitical tensions and social unrest, plus continuing uncertainty over Brexit all came together to create a tougher than anticipated business environment for airlines. Yet the industry managed to achieve a decade in the black, as restructuring and cost-cutting continued to pay dividends. It appears that 2019 will be the bottom of the current economic cycle and the forecast for 2020 is somewhat brighter. The big question for 2020 is how capacity will develop, particularly when, as expected, the grounded 737 MAX aircraft return to service and delayed deliveries arrive," said Alexandre de Juniac, IATA's Director General and CEO. "

Economic Growth: GDP is forecast to expand by 2.7% in 2020 (marginally above the 2.5% growth in 2019). World trade growth is expected to rebound to 3.3% from 0.9% in 2019, as election year pressures in the USA contribute to reduced trade tensions. Growth is supported by actions from central banks as well as easing fiscal policy.

Fuel Costs: Slower-than-expected global economic growth in 2019 contributed to lower energy demand, with crude oil prices averaging around $65 per barrel (Brent), compared to $71.60 in 2018. Oil supply is also plentiful, boosting inventories. As a result, oil prices are expected to dip further in 2020 to $63 (Brent). Jet kerosene prices are also expected to dip, averaging $75.60 per barrel versus $77 per barrel in 2019. The expected industry fuel bill of $182 billion will represent 22.1% of expenses, down from $188 billion or 23.7% of expenses in 2019.

Cargo: Cargo traffic turned negative last year for the first time since 2012. The 3.3% annual decline in demand was the steepest drop since 2009 during the Global Financial Crisis. Freight carriage, meanwhile, slipped to 61.2 million tonnes from 63.3 million tonnes in 2018. Cargo traffic is expected to rebound moderately with 2.0% growth in 2020, with tonnes forecast to reach 62.4 million, which is still below the 2018 result. Yields will continue to slide with a 3.0% decline forecast for 2020, an improvement from a 5.0% decline in 2019. Cargo revenues will slip for a third year in 2020 with revenues expected to total $101.2 billion, down 1.1% from 2019.

The regional profit picture is mixed in both 2019 and 2020. Africa, Middle East and Latin America are all expected to lose money in 2019, with carriers in Latin America returning to profit in 2020 as regional economies strengthen. Airlines in North America continue to lead on financial performance, accounting for 65% of industry profits in 2019 and around 56% of aggregate earnings in 2020. Financial performance is expected to improve or remain the same compared to 2019 in all regions except for North America, where expected capacity growth owing to new aircraft deliveries could put pressure on earnings.

North American carriers are expected to post a net profit of $16.5 billion (down from $16.9 billion in 2019). That represents a 6.0% net margin and a net profit of $16.00 per passenger. The region managed to improve profitability in 2019, as the still strong economy and structural improvements in the industry allowed unit revenues to hold up much more than in other regions. But in 2020, unit revenue and profitability are expected to reduce. This will be the result of a slowing economy and a significant increase in aircraft deliveries particularly with the expected return to service of the 737 MAX fleet.

European carriers are forecast to report a $7.9 billion net profit in 2020 (up from $6.2 billion forecast for 2019) as airlines in the region benefit from the opposite pattern of the developments expected in North America. Economic growth is forecast to pick up and, as a result of substantial cuts in expansion plans, capacity growth is expected to be moderate, helping to improve the supply-demand balance. The net profit per passenger is expected to be $6.40 (3.6% net margin). This relatively good aggregate performance for the region hides a long list of airlines just breaking even or making losses, which is why there were a series of European airline failures in 2019.

Asia-Pacific carriers will be helped by the modest recovery in world trade and air cargo, showing a $6.0 billion net profit in 2020 (up from $4.9 billion in 2019) for a 2.2% net margin. Asia remains the manufacturing center of the world and revenues from transporting many of those goods are a significant proportion of sales for many of the region's airlines. But the trade war is assumed just to be on hold; trade tariffs are not reversed. Consequently, the rise in trade and cargo volumes is moderate. The net profit per passenger is anticipated to be $3.34.

Middle Eastern carriers are continuing a restructuring process and announced schedules point to a substantial slowdown in capacity growth for 2020. After very weak economic growth in 2019, which limited local traffic, some rebound is expected in 2020. Restructuring and stronger growth will boost performance. But this will take time and a loss is expected for a third consecutive year, estimated at $1 billion, trimmed from $1.5 billion in 2019.

Latin American carriers are expected to benefit from improvements to the underlying economies and restructurings and return to the black next year with a small profit of $100 million. Apart from currency weakness in 2019, the region's economy slowed sharply to just 0.2% due to problems in Mexico, recession in Argentina and a decline by around one-third in the size of the Venezuelan economy. In 2020 airlines will be helped by the rebound to 1.8% growth forecast by the IMF, led by stronger growth in Brazil and Mexico and less severe contractions in Argentina and Venezuela. This represents a $500 million positive swing compared with an expected loss of $400 million in 2019.

African carriers continue to suffer structural problems of high costs—in large part owing to government taxes and fees--and low load factors. Economic growth in the region has been relatively good and is expected to rise in 2020, but markets are extremely fragmented and inefficiently served in the absence, so far, of a Single African Air Transport Market. As a result, they are projected to show a loss of $200 million, similar to 2019.

Some key indicators of the benefits from increasing global connectivity include: