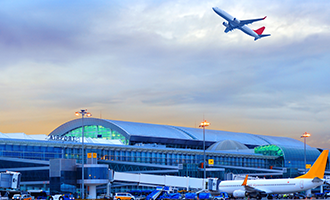 IATA plays a leading role in coordinating efforts among aviation stakeholders to ensure that Air Traffic Management (ATM) standards are globally harmonized. ​Several regional ATM programs have been initiated or launched across the world, without alignement. They cannot be sustainable solutions.

In addition, future ATM systems must be managed as an integrated network that is harmonized and interoperable to achieve on-time operations, predictability, and low carbon footprint. Currently the incompatibilities in technologies, aircraft equipage, and performance requirements create unsustainable business cases for airlines considering investment decisions.​ Technological solutions must be derived in collaboration amongst all stakeholders to ensure functional compatibility with airborne systems and timeliness of implementation.

The User Requirements for Air Traffic Services (URATS) – Air Traffic Management (ATM), Volume I (pdf), presents IATA’s positions on ATM concepts to be applied as a reference for air navigation services provider’s (ANSP) investment plans and in the adoption of new cockpit technologies.

Without the alignment of airline, airport and ANSP investment plans, operational benefits remain elusive and any new ATM program may not deliver its promised objectives. There is a critical need to develop  interoperable air navigation systems that are based on tangible, cost-effective operational objectives, which will ensure that the needs of the aviation community are met, while considering environmental impacts.

The International Civil Aviation Organization (ICAO) approved the Global Air Navigation Plan - Doc 9750​ (pdf) to serve as a worldwide policy, establishing clear linkages between operational benefits and technological developments, that allows all ICAO Member States to advance their Air Navigation capacities based on their specific operational requirements. The GANP brought forward the concept of Aviation System Block Upgrades (ASBUs), which serve as a benchmark for global ATM interoperability. The ASBUs identify sets of improvements that can be globally implemented, from a defined point in time, to enhance performance of ATM Systems.

The principle of First-Come-First-Served has served the aviation community well for many years. However, this principle has become increasingly problematic, especially in periods of technological transition when there are still significant numbers of less capable users. For airlines, the most important objective is to have an ATM system that has the greatest capacity, commensurate with the demand, and for it to operate with the best possible efficiency.

The Most Capable Best Served (MCBS) is a methodology that introduces operational improvements, also known as Service Priority. The MCBS concept is an effective tool in managing the evolution towards new equipage levels focusing on:​

IATA is engaged in discussions surrounding Trajectory Based Operations (TBO), Flight & Flow Information for a Collaborate Environment (FF-ICE) and System Wide Information Management (SWIM).  These are future ATM operational concepts and technologies envisioned to accommodate future growth of traffic demands and new entrants into the airspace environment from the UAS or Commercial space activities.  IATA sees the need for operational environment changes that will assure a benefit between all aviation stake holders. (Airline, ANSP, Airport, Other airspace users).

The TBO concept has been designed to allow the aircraft to file and fly the path most closely aligned to the user-preferred flight path, by reducing potential conflicts and resolving demand/capacity imbalances earlier and more efficiently. In such an environment, a four-dimensional (4D) flight trajectory, collaboratively developed managed and shared, would serve as the common reference for decision-making by all involved stakeholders.  This concept will require significant information exchanges including Flight planning /Trajectory management information, AIS information, and MET information, to plan and manage the trajectory.

FF-ICE will replace the Current FPL format and the tool used to coordinate between ATC facilities (AIDC). FF-ICE defines the information requirements for flight planning, flow management and trajectory management. Flight information and associated trajectories are the principal mechanisms by which ATM service delivery will meet the operational requirements. FF-ICE is designed to have global applicability and will support all members of the ATM community in achieving a strategic, pre-tactical and tactical performance management system. The exchange of flight/flow information will assist the construction of the best possible integrated picture of the past, present and future ATM situation to support Trajectory Based Operation (TBO).

The System Wide Information Management (SWIM) concept, will consist of standards, infrastructure, and governance rules that support the increasing need for open and timely data exchange and is intended to replace the existing data exchange infrastructure.

The SWIM concept is being designed to overcome the current limitations in today’s operational environment. By facilitating the exchange of ATM information between known parties, SWIM will complement human-to-human exchange with machine-to-machine communication, while improving data distribution and accessibility via interoperable services.

IATA Webinar Series - What will future operations look like?

IATA has held webinars to introduce the concepts from different angles for familiarization of these new concepts and technologies. The objective of the webinars aim to address:

What is TBO, FF ICE, and SWIM?