​​​​​​​​​​​When evaluating and determining the overall airport performance, it is crucial to have a balanced view of the system from the perspective of different airport stakeholders and users. Therefore, IATA and ACI have joined forces to provide an objective and unbiased analysis of the Level of Service (LoS) at airport terminal facilities. The joint assessment will determine the best possible solutions to optimize the LoS for the whole airport community.​​​​​​​​​​​​​​​​​​​​​​​​​​​​​​​​​​​​​​

Design and operate terminal facilities with an OPTIMUM service level, avoiding over - or under-providing. The below infographic represents the typical flow a passenger will go through at your airport's terminal at departure and arrival. 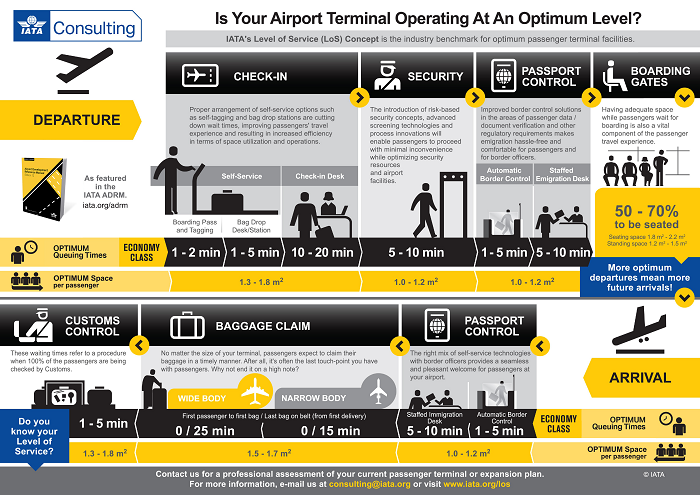 The first step to optimize airport resources is to know where you stand. Comparing yourself to leading airports and industry standards will allow you to identify areas where you need to improve in order to minimize waiting times, to maximize the efficiency of facility operations and to ensure cost-effective development. The application of the improved Level of Service (LoS) concept, featured in the IATA Airport Development Reference Manual (ADRM), provides a detailed benchmark and determines if:

Analysis of the LoS within current or future terminal facilities, complemented by recommendations for improvements.

Note: The future LoS can only be assessed by using simulation technology.

By carrying out a comprehensive capacity/demand study, the future terminal facility requirements for all processing / holding / circulation sub-systems will be determined, using the OPTIMUM LoS parameters as key inputs.

Coaching on the Improved LoS Concept and its correct application.

With the ADRM, IATA & ACI define airport industry standards and guidance materials that are commonly recognized and applied globally. The ADRM is the most comprehensive manual for all aspects of airport planning, capacity definition and facilities design. It includes the Level of Service Concept – which is a main criterion for developing passenger terminal facilities or for assessing the provided service performance. IATA & ACI are the originators of the LoS Concept and therefore understand best how to correctly apply it.

IATA & ACI have played a key role in the aviation industry for decades. During this time, our experts have gained extensive experience in elaborating multiple LoS studies for small regional airports to big international hubs. Our expert team has hands-on knowledge about international airport planning standards & best practices and can effectively adapt the LoS Concept to specific local requirements.

As the global representative and trade association of the airline and airport industries, IATA & ACI have direct access to their members. Having straightforward access is essential for collecting critical inputs (such as actual processing times, waiting time expectations etc.) when it comes to carrying out LoS studies.

The evaluation process and recommendations pertaining to LoS will be fair and unbiased – to ensure achieving the best possible solutions for the whole airport community.

Our experts use advanced planning tools –such as simulation– in order to support all kinds of LoS-related studies. Especially in case the analysis requires the detailed assessment of future facility requirements or when terminal operations have major implications, a dynamic simulation tool is essential to derive precise results.

Our experts stand at the forefront of the Level of Service for airport facilities. IATA Consulting has worked with a great number of airports around the world and suggest the best solution for a sustainable and optimum Level of Service.

Below is a selection of some of our clients: 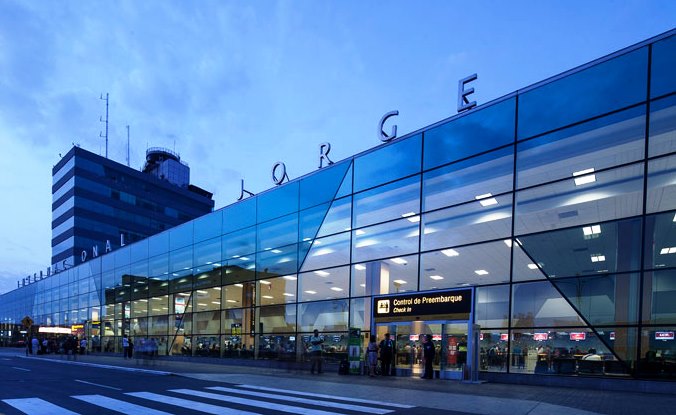 Commissioned by a Peruvian governmental entity supervising public transport infrastructure, IATA conducted a detailed Level of Service Assessment study for 15 airports that are being operated by private companies. Over a study period of 180 days, all airports were inspected during their typical busy periods and all relevant LoS KPIs were measured on-site (e.g. actual waiting times, queuing lengths and queuing space), at the various terminal sub-systems. Upon completion of data collection, a thorough LoS analysis has been carried out, following IATA’s best practice methodology, the guidance from IATA’s Airport Development Reference Manual (ADRM) as well as the agreed, specific LoS requirements/targets as outlined in the airport concession contracts. At the end of the study, IATA presented to OSITRAN the final results, consisting of each airport’s LoS performance for the reference year 2019.

IATA first performed a comprehensive baseline simulation on a typical busy day to understand the current situation in terms of terminal capacity & service levels at the various sub-systems. IATA then organized an expert workshop with all relevant airport stakeholders to discuss the baseline results and to jointly develop Quick Win Improvements (e.g. enhancing operational processes, using more automation). Subsequently, IATA performed another simulation analysis to assess the future expected LoS, taking into account not only the assumed improvements, but also increased passenger demand.

After having performed a LoS Assessment for the current situation at the various sub-systems (with support from a simulation tool), IATA conducted an airport stakeholder workshop to converse about the LoS performance and to jointly derive Quick Win Improvements, with the focus on sub-systems that currently do not achieve LoS OPTIMUM. Then, another simulation analysis has been carried out to anticipate the future LoS performance (assuming increased passenger demand), basically to verify whether the proposed Quick-Win optimizations will be effective and resulting in LoS improvements.

Once the simulation model had been calibrated, IATA conducted a comprehensive baseline simulation to understand the LoS situation at the various sub-systems. On special request, this LoS Assessment was analyzed for the typical busy days of 6 individual months from the reference year. Subsequently, IATA organized an airport stakeholder workshop to discuss the LoS results and to commonly elaborate Quick Wins, such as enhancing operational processes or using more automation.

In order to derive precise LoS Assessment results, IATA first build up a simulation model and calibrated it. Then, a comprehensive baseline simulation on a typical busy day has been carried out, to better understand the current situation in terms of terminal capacity & service levels at the various sub-systems. Thereafter, IATA performed another simulation analysis to eventually determine the actual terminal capacity, considering certain operational improvements and already planned expansion measures.

IATA first conducted on-site LoS KPIs measurements and observations during a typical busy period, not only allowing the expert team to better understand the current situation and operations, but also to conduct the LoS analysis and eventually determine the LoS performance at the various sub-systems. Afterwards, IATA organized a workshop with the Client (airport operator) to discuss the LoS Assessment results and to jointly develop Quick Wins that can be easily implemented – both in short time and at low cost.

At the beginning of the study, IATA came on-site during a typical busy period in order to conduct LoS KPIs measurements (maximum waiting times & maximum queuing lengths) and observations about the terminal configuration and its operations. The measurements have then been used in the technical LoS analysis to determine the actual LoS performance at the various sub-systems. For sub-optimum facilities, IATA then provided a set of suggested Quick Win Improvements.

To familiarize with the terminal and its operations, IATA came on-site during a typical busy period. This inspection was also used to measure the actual LoS KPIs during the peaks. Then, this captured data has then been used as key input to the LoS analysis and subsequent determination of the LoS performance for each sub-system. After understanding the current LoS situation, IATA organized a workshop with the Client (airport operator) to elaborate on the LoS Assessment results and to discuss about potential recommendations for improvements. 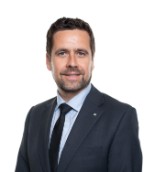 As a specialist in the airport industry, Jurgen Renner worked in the aviation business for 20 years. He planned and managed a large number of consultancy projects more particularly in airport development, design and management.

A joint initiative between IATA and Airports Council International aims to optimize guidelines for passenger service at airports.

Thank you for your interest in Level of Service. Please contact us using the form below.