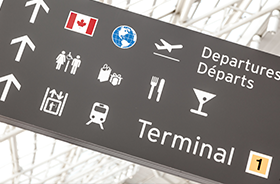 ​Montreal - The International Air Transport Association (IATA) asked the Canadian Government to improve the competitiveness of its aviation sector by prioritizing the elimination of Crown Rents over consideration of airport privatization.

“The Canadian government has already pocketed about C$5 billion as the historical landlord of airport property. That’s a C$5 billion disincentive to travel, to visit this wonderful country or to plan a business trip. Eliminating Crown Rents would boost Canada’s GDP by over C$300 million annually, create more than 4,000 jobs and generate an additional C$111 million in tax receipts. This should be the priority,” said Alexandre de Juniac, IATA’s Director General and CEO.

The call to abandon Crown Rents was made in a speech to the Montreal Council on Foreign Relations in which de Juniac congratulated the Canadian government for not including airport privatization in its 22 March budget announcement. “We hope that Transport Minister Marc Garneau’s motivation to defend the interests of travelers will keep the privatization idea on the back-burner permanently. Let me be completely unambiguous. Canada will regret it if the crown jewels are sold,” said de Juniac.

De Juniac elaborated on his concerns noting the industry’s disappointment with privatizations to date. “We have not seen a regulatory framework anywhere in the world that has been able to successfully balance profit and public interest over the long-term. But we have seen airport privatizations dent a country’s competitiveness by increasing the costs of mobility and compromising service levels,” said de Juniac.

“Airports should focus on enabling economic vibrancy in the communities they serve. That means providing sufficient capacity, with high service levels at affordable costs so that airlines can develop connectivity. Community owned airports—as is the case in Canada today—have every incentive to do so. Private companies, however, have a different goal which is to maximize profits for their shareholders,” said de Juniac.

Aviation in Canada plays a key role in the economy—linking Canada to global markets and underpinning some 600,000 Canadian jobs. The government’s open dialogue in the Review of the Canada Transportation Act was a good example of the consultation with industry that is so critical to building a policy environment that supports growth and prosperity through competitiveness.

“I hope that the Government’s openness to dialogue will point it towards Smarter Regulation principles on issues as diverse as passenger rights, tax levels, and infrastructure development,” said de Juniac. In the same vein, IATA also urged Canada to find ways to remove the patchwork of provincial environmental measures impacting aviation to align with global efforts such as the Carbon Offset and Reduction Scheme for International Aviation (CORSIA) recently agreed by governments through the leadership of the International Civil Aviation Organization.