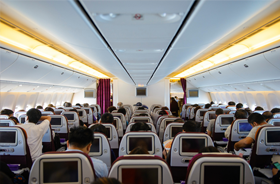 October's performance was a strong bounce-back after the hurricane-related disruptions in September. Domestic and international travel growth largely was in balance.

"As expected, the recent severe weather in the Americas region had only a temporary impact on the healthy travel demand we have seen this year, and we remain on course for another year of above-trend growth," said Alexandre de Juniac, IATA's Director General and CEO.

October international passenger demand rose 7.3% compared to October 2016, which was an improvement compared to the 6.6% demand increase for September. Airlines in all regions recorded growth. Total capacity climbed 6.0%, and load factor increased 1.0 percentage point to 79.4%.

Domestic demand climbed 7.2% in October compared to October 2016, while capacity rose 6.6%. India and China continued to lead all markets, with double-digit growth rates.

The Big Picture
Demand for air travel remains strong as we head into the holiday travel season, and signs point to the broad-based economic upturn continuing into 2018, which is good news for demand for air travel. Tomorrow, IATA will hold our annual Global Media Day, bringing together some 100 journalists and bloggers from around the world, where we will present our updated economic forecast, among other topics. I look forward to this opportunity to discuss and debate the key issues and initiatives facing commercial aviation with our colleagues in the media," said de Juniac.