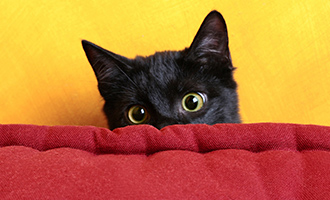 You will find below the information required to assist you in making transportation arrangements for dogs and cats with the airlines.

Temporary Dog Entry Ban Into the USA
The US CDC’s temporarily suspended the entry of dogs into the United States from countries classified as high risk for dog rabies. More info & guidance on US dog ban.

Canada Prohibiting Dog Entry from High-Risk Countries
As of 28 September 2022, the CFIA is implementing a new measure to reduce the risk of introducing dog rabies from countries classified as high-risk into Canada. More info on the dog import restrictions.

How to prepare your pet prior to booking

When do you want your pet to travel?

If you ship your pet as air freight, check with the airline to ensure the air freight facility is open so your pet may be claimed by the consignee. Note that it is preferable to ship your pet on week days as all staff are working and liaison is easier all along the route.

Contact the airline you have selected to confirm that they accept your pet on the day and flight that you prefer. Some airlines restrict the number of animals on a flight so the more advance notice you give them the better it is.

Transport of snub nose dogs, such as boxers, pugs, bulldogs and Pekinese, in hot season is not recommended. These animals have difficulty in maintaining a normal body temperature in hot weather.

Where is your pet traveling to?

Is your pet going to travel within your own country, or will it be traveling internationally? Do you intend to break the journey, or stopover at an intermediate station? What is the pet's final destination?

What is your pet's size and weight?

Only small dogs and cats can go in the cabin. Some airlines may not even allow them in, and will transport them as special baggage in a heated and ventilated hold. Do not worry, cats and dogs actually travel better this way because it is quieter and they will rest in a darkened environment.

Do you have a suitable container for your pet?

It is important that you purchase an appropriately sized container for your animal traveling by air. Airlines use the following indications to ensure the animal has enough space to turn about normally while standing, to stand and sit erect, and to lie in a natural position.

Guidance for Dimensions of Container

A = length of animal from tip of nose to base/root of tail.
B = height from ground to elbow joint.
C = width across shoulders or widest point (whichever is the greater).
D = height of animal in natural standing position from top of the head or the ear tip to the floor (whichever is higher).

Note:
Measurements A, B, C and D for determining the container dimensions must relate to the largest animal. 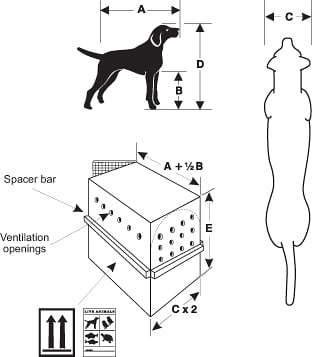 How many animals will be traveling?

Weaned puppies or kittens may travel well together in the same primary enclosure. When crating puppies or kittens together in the same container/primary enclosure they must be from the same litter, not older than six months, weigh no more than 14 kg each and no more than three per container. Certain national regulations require cats or dogs to be crated individually unless the consignment is a litter over 8 weeks and travelling with the mother.

A maximum of two adult animals of comparable size up to 14 kg each, that are compatible in size and used to cohabiting, may be shipped in the same container/primary enclosure. Animals over 14 kg must be crated individually.

Airlines have specific procedures in place for the acceptance, handling and delivery of your animal. The environmental needs of the animals are duly considered during loading, off-loading or at a transit stop.  More about airline procedures

Airlines have specific procedures in place for the acceptance, handling and delivery of your animal. The environmental needs of the animals are duly considered during loading, off-loading or at a transit stop.

You can either find an animal shipper who can make all the necessary reservations and take full charge from collecting your pet, boarding it if need be, taking it to the airport and have it met at the other end and delivered to destination.

In some countries, this may be the easiest and surest method and some airlines will not accept animals handled by anyone other than a shipper. The airlines can usually give you a list of shippers with whom they work.

But it is possible that you can do all this yourself. Check with the airline for any special requirements for shipping your pet.

Most airlines require a health certificate for any animal they are transporting, whether in the cabin or as an unaccompanied shipment. Health certificate is delivered by your veterinarian and stipulates that the animal is healthy and fit to fly.

Contact the airline you have selected to confirm that they accept your pet on the day and flight that you prefer. Some airlines restrict the number of animals on a flight so the more advance notice you give them the better it is.

Reconfirm at least 48 hours before departure.

Find out how soon before the flight you have to check in. Pets become stressed with all the bustle at an airport, so keep it to a minimum.

Train your animal to its new surroundings

Let it become familiar with the crate or kennel a few weeks or months before your planned departure. Purchase one in advance and get your animal used to being confined in it. Remember taking an animal out of its natural environment or surroundings is by definition stressful.

Animals behave perfectly fine when accustomed to the kennel or crate they are transported in. As a responsible pet owner, this responsibility is often overlooked.

Sedation & use of tranquilizers on pets

It has been a long standing practice of IATA and its constituent carriers to discourage the use of sedatives and tranquilizers in animals to be transported either as cargo or as cabin baggage due to the potential for adverse effects during transport. This view is endorsed by veterinary organizations such as the American Veterinary Medical Association.

In general, these drugs are administered prior to or during air transport to minimize the potential for undesirable behavior. Most commonly, drugs such as acepromizine which is in the phenothiazine class of drugs or benzodiazopam have been commonly prescribed. Of the two, acepromizine has the longest history of use given its rapid action and neuroleptic mode of action. It depresses motor activity as well as the sympathetic nervous system. Animals administered this drug often lose their righting ability and their sense of balance as a function of dose. Depending upon the dosage, they can lose the ability to position themselves and are susceptible to injury as well as obstruction of the airway due to abnormal postures. While this drug has a number of legitimate clinical usages and can be helpful in minimizing aggressive behavior as well as facilitating the induction of anesthesia with other agents, its use without frequent or continual observation of the animal can lead to situations where the animal’s life can be threatened.

Other neuropharmacologic agents such as amitriptyline (an antidepressant) and chlordiazepoxide (an anti-anxiety agent) singly or in combination have also been used to alter behavior in dogs and other animals. Like other drugs, they have some side effects that can be problematic when used in higher dosages including cardiac dysrhythmia, hypotension, CNS depression, and rarely convulsions. These agents, as well as tricyclic antidepressants such as clomipramine (aka Anafranil) which has a veterinary counterpart—Clomicalm, have been approved by the FDA for treating separation anxiety.

These drugs that are used to treat inappropriate behavior in pets must be administered for a period of weeks before changes will likely be noted in pet behavior. Animals that have been placed on these drugs to address behavioral problems at home may continue to have the benefit of the medication even though it has not been given during transit.

It is not established, and probably is unlikely, that tricyclic antidepressants or other available psychotherapeutic agents will reliably alleviate the risk of panic attacks and destructive behavior while in transit. While heavy sedation with all of its associated risks might be able to accomplish this, deciding upon the appropriate dosage to maintain the desired effect over a long and perhaps variable transit time in a varying transit environment and with little chance of re-dosing or adequate observation would either put the animal at risk or may not adequately address the potential for undesirable behavior.

IATA therefore continues to endorse recommendations not to sedate or tranquilize pets or other animals in transit specifically for the purposes of potentially preventing panic attacks or destructive behavior during that period of carriage. If sedation or tranquilization is to be done specifically for the journey for valid medical reasons, it needs to be done under the direction of a veterinarian and the administration of drugs - including time and dosage level—be noted on the health certificate. If such medications are to be used, this should be done only in those shipments accompanied by trained individuals appropriately certified/licensed to administer these drugs and when the ability to take emergency actions in the event of adverse events, exists or is possible.