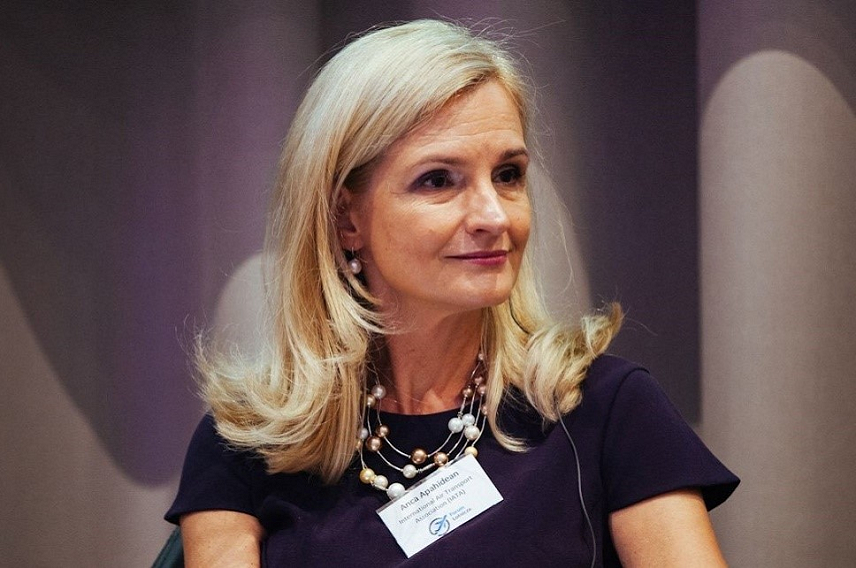 For 2 years before that, she was part of IATA’s ‘Simplifying the Business’ team, as Program Manager Eastern Europe & CIS. Prior to joining IATA in 2006 as Country Manager, Romania, Anca worked for 10 years at British Airways where she held various roles in their Bucharest office, among which Airport, Finance, Sales and Account Management.

Anca in her own words:

“I graduated as an Aircraft Engineer and then completed additional studies in Sales and Marketing, Business Administration, and Aviation Management. I started my professional aviation career 30 years ago as a Flight Attendant, accredited by the Romanian Civil Aviation Authority as Cabin Safety Inspector, providing ground and in-flight training for flight attendants. I had the opportunity to fly many VIPs, including Michael Jackson and his crew for 3 months during the History World Tour back in 1996! Needless to say, ‘M.J.’ was a visionary: he scrupulously wore a mask (almost) every time when onboard his plane!”

Anca, thanks for taking the time to answer our questions, particularly in such challenging times.

In my area, the clock stopped March 15. Airline operations were closed in the Czech Republic and Poland, followed by Slovakia and Hungary, while Romania and Bulgaria were continuing to operate partially. Tarom was among the few airlines which did not completely stop passenger operations. Airlines in my cluster performed repatriation flights, playing a big role in maintaining operations, all the while bringing some revenues. Also, most airlines continued to operate belly cargo, occasionally converting passenger aircraft to fly essential medical equipment in their cabins. This goes a long way in showing the extent of airline adaptability and flexibility to extraordinary circumstances and shows another great value our industry brings to society.

Governments’ responses differed from one country to another. However, I admire their common will to protect employees through various technical unemployment programs. Some states offered special loans to their main carriers (130 Mil EUR in Romania granted to Tarom and Blue Air) while others offered different credit lines to their airports (30 Mil EUR for 14 airports in Poland and 3 Mil EUR for the Timisoara Airport in Romania). The Bulgarian Government reduced the amount of taxes paid by air carriers for the use of Sofia Airport in 2020 in order to incentivize them to retain or even expand their Sofia flight network. And most airports in our area offered special parking fees during the aircraft conservation period.

Notwithstanding, I strongly encourage other governments from my cluster to support their air transport industries, which are fighting for survival. The entire aviation community is in desperate need of financial relief, be it airlines, airports or ANSPs.

As an example, Czech Airlines, the country’s flag carrier and 5th oldest airline in the world still in operation, depends on the Czech Republic’s Government’s urgent support to reach its 100th anniversary in 2023…

Huge doesn’t even begin to cover it! Airlines needed to find creative ideas and engage with travel agents on how to offer a solution for their passengers through vouchers. Governments were supportive to amend EU261, sending letters of support for the airlines to the European Commission. In parallel, we were advocating together with our member airlines to the Area MEPs. Unfortunately, despite all our efforts, the answer from the Commission was not the one we expected.

Restart recommendations were not met in a homogeneous fashion across all the stakeholders. While Civil Aviation Authorities were observing the EASA/ECDC guidelines and trying to implement these in the national legislations, we had a strong objection from the Health Authorities who were mandating a 14 days quarantine in all countries in our area. However, a tri-lateral agreement was recently signed by Hungary, Slovakia and the Czech Republic. These countries agreed to open their borders to citizens of neighboring country without imposing quarantine measures. Airlines have started domestic operations and a few European flights, but we are still at around at 10% of pre-pandemic levels. We are strongly advocating among all our National Enforcement Bodies for a harmonized approach in which all states must mutually apply the EASA/ECDC guidelines, as local deviations and exceptions will make it far harder for air travel to restart effectively and efficiently.

First and foremost, while entry restrictions are starting to be lifted in some countries, rebuilding passenger confidence and regaining the trust of travelers will be crucial to how fast demand will recover. Consistency is vital in this regard, and the erratic approach to the restart measures by different European countries is very concerning.

The Eastern Europe cluster is home to WizzAir, one of the strongest low-cost carriers in Europe, which has shown extraordinary resilience in this crisis and has declared to be prepared to fly again. Its specific business model is designed to remain competitive in any of the markets in which it operates, and I believe this will not evaporate into thin air when our industry starts to recover.

We have joined forces with all our member airlines, and Civil Aviation Authorities by offering expertise, business intelligence and sharing best practices with our National Enforcement Bodies to implement confidence boosting measures. We will continue to work and ensure the recovery of aviation. At this stage, it is nevertheless very difficult to predict the aftermath of the crisis.